– The Budget confirms that the UK’s fiscal position is worse than the OBR’s previous outlook, both in cash terms and structural terms. The Chancellor has not sought to offset this deterioration. The Budget itself is roughly neutral, with perhaps a slight tilt to loosening once off-balance sheet measures are taken into account. But, this leaves largely intact the fairly heavy fiscal tightening, of about 1% of GDP per year, planned for the next three years (i.e.: 2013-15) with heavier tightening further ahead (2016-17). Fiscal drag should intensify this year.

– With the weak economy, the OBR has once again revised the UK’s public debt profile markedly higher. The UK’s general government debt/GDP ratio already has risen from 43% in 2007 to 90.7% at end-2012. The OBR now expects that this ratio will peak at 100.8% of GDP in 15/16 and 16/17. It seems that every year, the OBR adds a further 5-10% of GDP to the UK’s projected debt ratio and pushes the peak back by a year or two. In practice, we expect the debt ratio will rise even further above 100% in coming years. Having already been downgraded by Moody’s, we expect the UK is likely to be downgraded from AAA (or equivalent) by other ratings agencies this year.

– The changes to the MPC’s remit encourage the MPC to interpret the 2% inflation target flexibly and give the MPC access to a much wider toolkit of policy measures, including credit easing, official rates other than Bank Rate, liquidity provision and forward rate guidance — on top of the existing tools of Bank Rate and QE. The MPC are likely to loosen further by a range of channels, with QE, rate guidance and credit easing the early favourites. 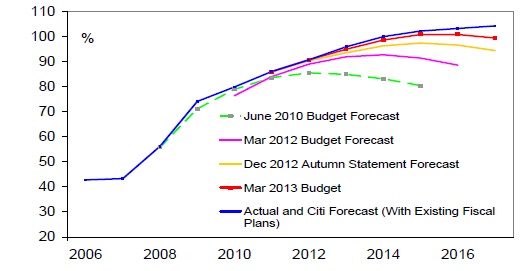 What Does the Budget Do?

From this starting point, the Budget itself is roughly neutral, with perhaps a slight tilt to loosening once off-balance sheet measures are taken into account. The Chancellor has slightly trimmed the plans for current spending – implying even sharper declines – using this to finance modest tax cuts nearterm (aimed at low income households, beer and petrol taxes, small businesses and lower corporation tax), with a £3bn rise in planned public investment in 2015/16. Overall, on the Treasury’s estimates, the Budget tightens fiscal policy by 0.1% of GDP in 13/14, loosens by 0.1% and 0.2% of GDP per year in 14/15 and 15/16 respectively, and tightens by 0.1% of GDP per year in 16/17 and 17/18. Including the off-balance sheet measures to assist homebuyers through the “Help to Buy” scheme to improve mortgage availability (the costs of which are not counted in the fiscal deficit), the Budget is neutral for 13/14, with the stimulus rising to 0.3% of GDP for 15/16.

This roughly neutral Budget leaves largely intact the fairly heavy fiscal tightening planned for the next few years via an extended squeeze on public spending. The Treasury estimate that the cyclically adjusted primary balance (excluding the transfer of the Royal Mail pension assets) will tighten by about 1% of GDP in each of the next three years (13/14, 14/15 and 15/16), with tightening increasing to 1.7% of GDP in 16/17 and 1.1% of GDP in 17/18 – after a roughly neutral stance in 12/13. Fiscal headwinds will intensify. On the Treasury’s estimate, the fiscal stance has tightened by 3.7% of GDP over the last three years and will tighten by a further 5.8% of GDP over the next five years. The UK is only about 40% through the overall fiscal tightening, and has done a lower share of the required spending cuts.

The OBR has once again cut its growth forecasts and now expects growth of 0.6% in 2013, 1.8% in 2014 and 2.3% in 2015, revised down by 0.6% for 2013 and 0.2% for 2014. The downgrades are concentrated in consumer spending and business investment, with a slightly less negative path for government consumption (because the OBR assumes that recent weakness in the government consumption deflator will continue, hence producing less severe weakness in the volume of spending). The extra public investment planned for 2015/16 translates into an OBR forecast that real government investment will rise by 1.8% in 2015 (whereas in the end-12 AS they forecast a 3.0% drop) – but the OBR expects public investment to decline in 2016 and 2017 (by 1.5% and 1.2% respectively). The OBR’s GDP forecasts are close to the consensus, while our own GDP growth outlook is even weaker, and we look for growth of just 0.4% this year and 0.7% in 2014.

With its new forecast, the OBR expects that the output gap will be at or above current levels (2.7% of GDP) until the end of 2016, and will still be about 2% of GDP even at the end of 2017 – implying a persistently disinflationary domestic backdrop. Note, however, that even with a weak path for the GDP deflator (averaging 1.9% y-o-y over 2013-17), the OBR expects RPI inflation to stay quite high, averaging 3.3% over 2013-17 and rising to 3.9% in 2017. This is a striking example of the way that RPI inflation can, for quite an extended period, become rather detached from UK cost and capacity pressures.

The OBR has again revised down its revenue forecasts in response to economic weakness (plus a modest erosion from the Budget tax measures). In all, the OBR’s forecast for revenues in the forthcoming fiscal year (13/14) is £48bn (7.2%) lower than expected two years ago and this revenue shortfall expands to £77.4bn (10.5%) for 2015/16. Compared to the OBR forecasts of a year ago, revenues are down by £10bn for 2013/14 (1.6%) with this shortfall rising to £41bn (5.6%) for 2016/17. Most of this deterioration reflects a weaker path for real and nominal GDP, highlighting just how large the fiscal costs of economic underperformance are.

The OBR’s forecasts – that the fiscal deficit will fall slowly from 7.8% of GDP in 12/13 (excluding the Royal Mail and APF transfers) to 5.5% of GDP in 2015/16 and 2.3% of GDP in 2017/18 – are reasonable given its economic forecasts. However if, as we expect, the economy continues to undershoot the OBR’s forecasts then, as has happened so dramatically over the last couple of years, the deficit should continue to overshoot their numbers.

MPC Remit – Greater Flexibility and Greater Authority for the MPC

Press reports had suggested that the government would announce a review or consultation of the MPC’s remit, with any changes following in a few months, perhaps to coincide with the start of Carney’s term as Governor at midyear. In practice, the Chancellor announced various modifications of the remit straight away. There are many minor changes, but we believe there are two major points:

No change to 2% CPI inflation target, but MPC encouraged to interpret the inflation target more flexibly. The target remains to aim for 2% CPI inflation “at all times” and options such as nominal GDP targeting have been rejected. However, the new remit encourages the MPC to interpret that target very flexibly and in particular to tolerate persistent inflation pressures from regulated prices, taxes and import prices. The remit expands the previous tolerance for short-run inflation deviations into tolerance for longer term undershoots/overshoots: “In exceptional circumstances, shocks to the economy may be particularly large or the effects of shocks may persist over an extended period, or both. In such circumstances, the Committee is likely to be faced with more significant trade-offs between the speed with which it aims to bring inflation back to target and the consideration that should be placed on the variability of output. In forming and communicating its judgements the Committee should promote understanding of the trade-offs inherent in setting monetary policy to meet a forward-looking inflation target while giving due consideration to output volatility.” This approach encourages the MPC to focus on CPI inflation measures excluding external shocks and regulated prices.

By contrast, in the January MPC minutes, the MPC seemed to be aiming to get CPI inflation back to 2% even in the face of persistent pressure from regulated prices, even if this required very low inflation in other areas. “Wage growth had remained subdued and, while productivity growth was also weak, the Committee’s central view remained that productivity growth would pick up as the economy expanded. But there remained a question as to whether this would put sufficient downward pressure on unit labour costs and market price inflation to offset the effect of rising regulated and administered prices.”

Greater toolkit for the MPC. Until now, the MPC has only had two tools: Bank Rate and QE. Decisions on other unconventional measures, such as the FLS, liquidity policy, whether to change the reserve-targeting system and set a lower interest rate on excess reserves, have not rested with the MPC, but have belonged to the BoE hierarchy (in conjunction with the Treasury if, as for the FLS, fiscal issues are involved). The MPC had no framework with which to use forward rate guidance and faced opposition from the Governor over whether to use it.

The new remit and market notice give broad support for the MPC to use or recommend a range of unconventional measures (highlighting some used by other central banks) including QE, changing Bank Rate or BoE interest rates other than Bank Rate, private sector asset purchases, credit easing, liquidity provision and forward guidance. The basic principle appears to be that the MPC as a body can decide to use pretty much any monetary or credit easing tool they would like, subject to government approval over fiscal risk or credit risk: “Given the ongoing exceptional challenges facing the UK economy, it is possible the Committee may judge it necessary to deploy new unconventional policy instruments or approaches in future, including some of those deployed by other central banks in recent years. The remit clarifies that the development of new unconventional instruments should include consideration with Government of appropriate governance and accountability arrangements.” If, as seems likely, the MPC want to loosen policy further, they now have a very wide choice of options.

The Budget’s underlying theme is of economic weakness, extended fiscal austerity and monetary flexibility. The Chancellor has not sought to offset the slippage on the fiscal side (in both cash terms and structural terms) with even greater upfront fiscal tightening. But, even though the economy is once again far weaker than expected, the Chancellor also has decided not to significantly defer the heavier fiscal tightening planned for the next three years. Behind all the tweaks, fiscal policy will tighten markedly in the coming year and stay tight for an extended period. That judgment to tolerate fiscal slippage at a time of economic weakness is understandable. But, it does leave the UK debt ratio rising for an extended further period (and we expect it will even overshoot the OBR’s forecasts).

Moreover, in our view, the government lacks credible plans to stabilize or reduce the public debt/GDP ratio in coming years. The OBR’s forecasts for the debt/GDP ratio to fall in 2017/18 rest on the assumption of heavy spending cuts in 16/17 and 17/18, greater cuts than in the next year or two. However, there are no proper public spending plans for those later years. The detailed public spending plans extend only to 2014/15, with the plans for 15/16 due to be agreed this summer (but facing considerable disagreement at present). Beyond that, the government simply has totals for public spending in 16/17 and 17/18, but no plans of where the axe will fall and no intention of producing such plans anytime soon. With the high and rising debt ratio plus the lack of credible medium term plans to return to fiscal sustainability, we expect the UK probably will be downgraded from AAA (or equivalent) by other agencies this year, and over the next year or two the UK may well be put on negative outlook for a further possible downgrade.

With fiscal policy set to persistent restraint and the more flexible remit, monetary policy is likely to loosen further and stay loose for an extended period. Stimulus is likely to come through a range of tools, including QE, rate guidance and credit easing in coming months – with other measures (e.g. lower rates on excess reserves, tolerance for renewed sterling depreciation) possible if the economy disappoints markedly, the EMU crisis flares up or sterling rises sharply. Exit strategies are distant. The UK needs to get a recovery first, and that probably will require a long period of loose monetary policy in our view.