It’s been a glorious run. The gold price climbed by nearly 500% from 2002 to present, making it one of the best performing assets. But already, many of the forces that made the yellow metal so attractive look to be turning over, and expectations for other supportive factors are overdone. Gold will have its day in the sun at other points down the road, but the clouds on the horizon could portend still lower gold prices over the next few years.

Gold’s allure has typically rested on two concerns about money. Either inflation alone, or in concert with a steep currency depreciation, is seen as a reason for holding gold rather than the prominent alternative, the US dollar.

In terms of current inflation, it’s hard to see why anyone would be worried. CPI inflation has all but melted away, not only in the US, but across the developed world (Chart 1). True, there’s been a bit more heat in the developing world, but for the four large players that make up the so-called BRIC group, inflation is still well below where it stood in 2011. Those in India might be somewhat more concerned, but it’s not clear that they would be better off piling into gold than simply holding assets in an alternative currency, like the dollar. Or that gold couldn’t rise in rupee terms, while still stalling in US dollar terms. 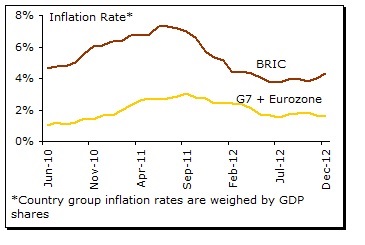 Those buying gold could fear what comes next. Neither measures of economic slack, which is still in abundance in the US, Europe and Japan, nor wage pressures, give any hint of inflation. So why would anyone worry?

In no small measure, the fear is rooted in a misread of monetary policy, particularly that of the US Federal Reserve. Investors have piled into gold fearing the consequences of an unprecedented build up in the balance sheets of the three largest developed economy central banks.

The myth is that these central banks, particularly the Fed, have been printing money with wild abandon, making inflation an inevitable final chapter to the story, and favouring gold as a hedge against that loss of purchasing power. A myth because, in reality, money growth has not been particularly brisk.

When the Fed buys bonds, it does so not by printing money, but by crediting the selling bank’s reserve deposit at the Fed. These reserves, some US$1.5 tn of them, are not money, and do not count in the money supply. Reserves are a necessary condition for bank lending, which does spark money supply growth, but not the only condition. Capital requirements, risk tolerance and loan demand are also critical, and for now, these are preventing a break-out in lending, and therefore in broad money supply.

Indeed, cause and effect runs the other way. It’s because credit collapsed in the recession, and has a lot of ground to make up, that central banks like the Fed, the Bank of Japan (BoJ) and the Bank of England (BoE) leapt into quantitative easing. The broadest money measure most appropriate for this purpose, a Divisia M4 Index, shows that although money growth has picked up in the US, there’s a mile to go to catch up to its pre-crisis trend (Chart 2). In sum, there is ample time for monetary authorities to rein in their balance sheets, or take other steps to lean against lending growth, when growth does pick up and inflation threatens.

Debt and the Inflation Temptation

A more credible argument recognizes that quantitative easing (QE) has not made inflation inevitable, but that the US will let prices surge as a means of inflating away its accumulated debt. A country can lower its debt/GDP ratio by being tough on deficits and lowering debt growth, or by letting nominal GDP, the denominator, climb with higher inflation. 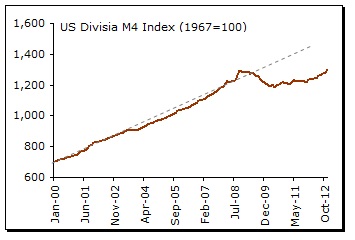 If history is a guide, that doesn’t seem to be the most likely outcome in the US. While the Weimar republic let hyperinflation build, that hasn’t been America’s approach to debt/GDP reductions. The two major periods of deleveraging, from 1945 to 1970, and again from 1995 to 2000, both featured historically low average rates of GDP inflation, and instead relied on taming debt itself. In the wake of recent budget deals, current fiscal plans are already on course for a substantial paring in both annual deficits and the debt/GDP ratio (Chart 3).

Investors might not fear inflation, but instead hold gold as an alternative to the dollar for fear that the greenback will weaken sharply against other currencies. That wasn’t just fear, but was reality for the US dollar from 2002 to 2008, a period in which the greenback experienced a steady slide against most other majors. But that slide was as much about where the dollar started, an overvalued level relative to trade fundamentals, one that generated an unsustainable trade and current account deficit. While the dollar might still be overvalued against some trade counter parties, including the Chinese yuan, the devaluation now behind us looks to have addressed much of the imbalance with other majors.

Chart 3: US to See Fiscal Improvements Ahead 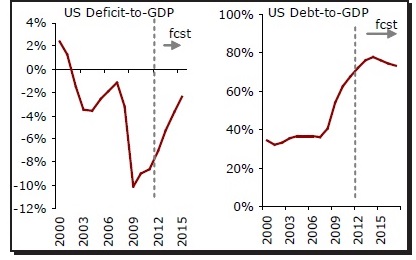 True, the US still sports an annual current account deficit of some US$480 bn or 3% of GDP. But the bulk of that is now the trade deficit in petroleum products (Chart 4, left). The petroleum balance is now making progress as US crude production and dampened gasoline demand growth cut into import requirements (Chart 4, right). Add it all up, and trade fundamentals suggest that most of the broad dollar decline is behind us.

In the past year, the US dollar has softened, against the euro at least, by the Fed reaching for QE while the European Central Bank (ECB) stood aside. Looking ahead, however, QE looks poised to end before 2013’s calendar runs out, as the Fed only needs to see a significant improvement in “the outlook” for labour markets to pull back, not the completion of that labour market recovery. With Europe in recession again, odds are that US monetary policy will tighten before that of the ECB, and if anything, the US dollar will recoup more of its earlier weakness against the euro.

One plus for gold, and a new one at that, has been the return of central banks as net buyers of gold. That’s part of an overall trend towards diversification, one that has also seen an increased appetite for alternative currencies like the Australian and Canadian dollars. 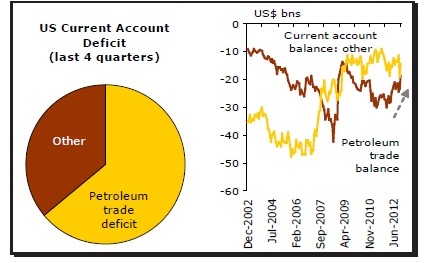 These reserve fund managers have not, however, been decisive in driving gold prices for the past decade. As central banks ran to the hills, as steady net sellers from 2002 to 2009, gold climbed 250% (Chart 5). In contrast, gold seems to be hitting a plateau just as some central bankers are adding weight. 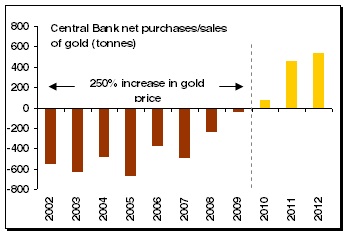 Instead, the elephant in the room has been the private investor, operating through the surge in gold Exchange Traded Funds (ETFs). They currently hold more than 2,500 metric tonnes, approaching the holdings of the IMF (Chart 6).

ETF gold purchases, as well as non-commercial long positions on the Comex, both peaked in 2009. At that time, the rush to gold was less about inflation, than it was about seeking an alternative to equities, after investors were bloodied in the recession’s crash. Since then, while ETFs have still been strong net buyers, the volumes haven’t been enough to sustain the upward price momentum.

Chart 6: EFTs: The Elephant in the Room 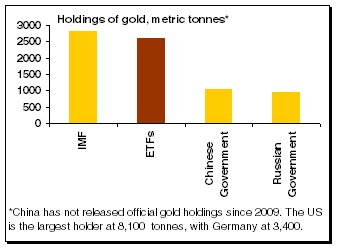 The ETF stockpile, and to a lesser extent, long positions in futures markets represent a significant risk of a pullback in gold, should investors decide that their money would do better elsewhere. And there are two reasons why such a rethinking should be on tap in the next two years.

First, the Fed will confound the inflationistas by pulling back from QE late this year, and begin to talk more seriously about 2015 rate hikes in the latter half of 2014. That actual and verbal tightening will push up bond yields, so the opportunity cost of holding a gold bar with a zero yield will also be increasing over the forecast horizon.

Second, improving global growth prospects for 2014, as the US moves past the steepest stage of fiscal tightening and China’s earlier stimulus kicks in more vigorously, should prompt a renewed leg-up for equities. One reason why gold seems to have plateaued since mid-2011 is that some investors are looking with envy at improving returns in the stock market. If the fear of equities helped build the ETF mountain, a few years of better performance could similarly take that mountain down to size.

We’re not expecting a huge torrent of selling over our two-year forecast horizon. The gold bugs will need more convincing that the Fed and other central banks will keep inflation under wraps as the economy recovers, and we will be a long way from full capacity in the US or elsewhere as 2014 comes to a close. But a continued slide to US$1,500/oz would still mean that gold will underperform equities as an asset class over that two-year period.

What does that mean for a related asset, equities in gold-producing companies? Not much, at least when judged by the past two years. While gold mining shares are also affected by trends in the pricing of their copper output, even allowing for that, they have been remarkably poor performers relative to the soaring price of gold in recent years. Namely, the TSX gold index suffered a near-30% slide, to a level last seen when gold was only US$1,000/oz. Operating performance and the inability to deliver new projects on time and budget, have been key to that result, with earnings growth on TSX gold companies falling short of analysts’ expectations and underperforming gains in the shiny metal recently. If gold slips further to US$1,500, it will be a turnaround in operating performance, rather than dynamics in the gold price, that will be critical to a recovery in the market’s taste for gold producers.