Eastern Europe Consensus Forecasts™ – Bi-monthly (alternate months) between May 1998 and April 2007 and monthly thereafter; and

A flexible TrendCharts feature enabling easy graphic display of the trends in our Consensus Forecasts™ over time has been added to each of the regional spreadsheet services beginning in late 2006. 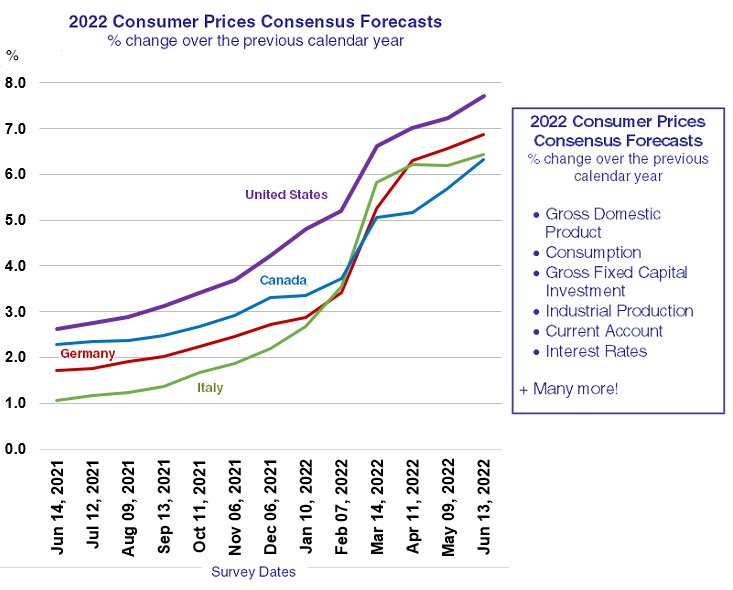 An important feature of the spreadsheet format is that the corresponding variables for each country are placed in the same column in each monthly spreadsheet, while the consensus figures for defined variables always appear in the same row. The date of the survey is also shown.

It is important to note, however, that the Significant Changes in the Consensus feature (page 2 of the hard copy publication), the special surveys (which begin on page 3), the summary table (back page of the hard copy), all historical data outturns, comparison forecasts, charts and text commentaries are not included in the spreadsheets. Variables covered for some countries may change occasionally, often due to country practice (a record of these is available to subscribers).

Excel spreadsheet data is delivered to clients of this service by e-mail on the day a publication is released. Further details can be obtained by contacting Consensus Economics. Prices (which include a hard copy subscription) are as shown below. Certain UK and European Union subscribers to these services may also be charged Value Added Tax.

In addition to receiving the historical and current survey data directly from Consensus Economics, these databases are also available as premium services on FactSet, on Macrobond, on Refinitiv Datastream, and on the RIMES electronic research platforms. For further information about these services, please contact Consensus Economics.