Published monthly, Consensus Forecasts™ - G7 and Western Europe offers a comprehensive outlook for the German economy, covering 12 macroeconomic variables over a 2 year forecast horizon. Forecasts are provided by leading economists whose individual views are shown together with the consensus (mean) forecast. Our reports include 4 years of historical data for these same variables as well as written analysis, charts and regular special surveys including long-term forecasts (detailed below). Furthermore, the publication provides Consensus Forecasts™ for the Euro against the US dollar in 3, 12 and 24 months time.
Download SamplesOrder

Germany is the largest economy in the Euro zone, with nominal GDP totalling €3332.2bn in 2020. The country’s population was estimated at 83.5mn (United Nations) in 2019. In 2020, the top export destination for German goods was the United States, closely followed by China and France.

Variables covered in our monthly analysis of Germany include:

Individual panellist forecasts are shown for each of the variables surveyed, along with the consensus (mean) forecast. The rows of forecasts are ranked by the GDP growth estimate for the current year, highest to lowest. In the hard copy and pdf version of the publication, we also show selected “comparison forecasters”  including the IMF, OECD, and European Commission. The table below shows a small example set of forecasts for GDP growth and Consumer Prices (CPI), taken from our survey of November 2020. 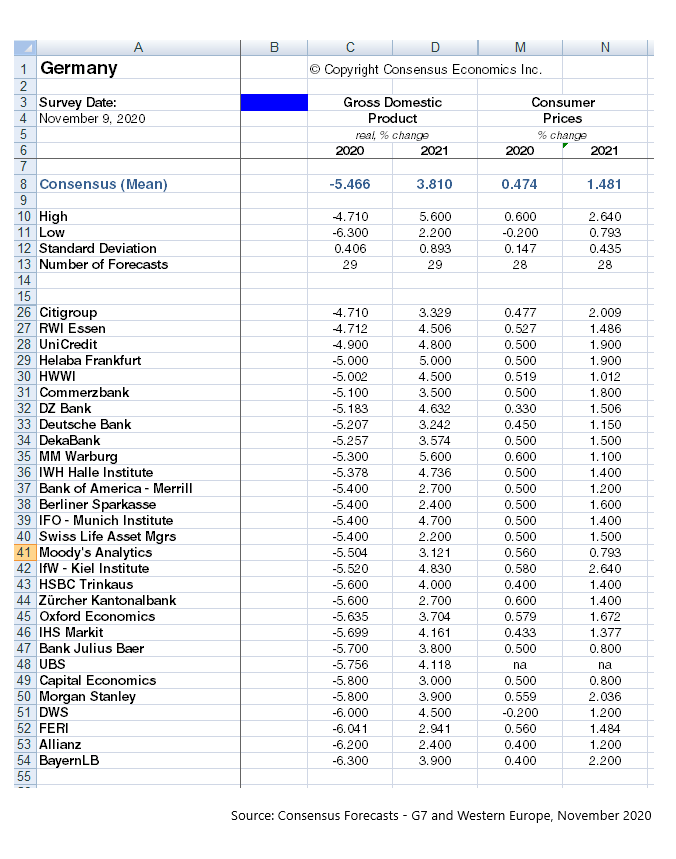 In addition to the regular surveys for the variables listed above we also undertake a number of Special Surveys for Germany on topics such as:

Selected historical data for Germany is shown in the table below: 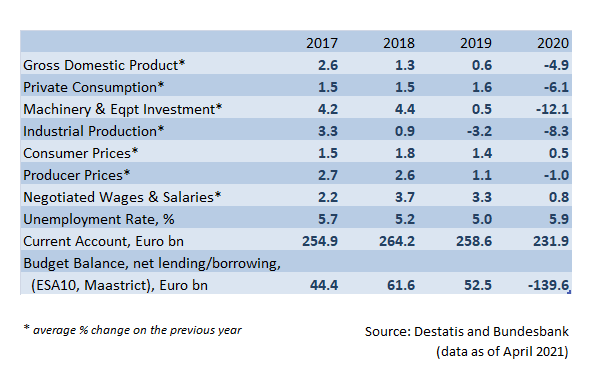 If you would like to view an entire copy of our G7 and Western Europe publication, containing forecasts for Germany and the 24 other featured economies, please click on the link below.
Download SamplesOrder