Our monthly inflation (CPI) charts show recent actual outturns (blue) since September 2021 and consensus estimates (red) from this month’s survey up to June 2023. Rising inflation pressures – heightened by the outbreak of war between Ukraine and Russia and subsequent enegry/commodity price crisis – have led to monetary tightening from ultra-loose policy positions adopted by central banks to nurse economies through the worst of the pandemic.

All inflation indicators continue to flash red in the United States. The headline CPI accelerated from an already-high 7.9% (y-o-y) in February to 8.6% in March. Core PCE prices, the Fed’s preferred measure of underlying price pressures, stood at 5.4% (y-o-y) in February, over 3 percentage points above the central bank’s 2% target. Elsewhere, house price increases are averaging almost 20% (y-o-y) in some cases. Last year’s inflationary bug-bear, supply-chain issues, remain in play in March’s ISM manufacturing survey, which also highlighted the soaring cost of energy and raw materials. The consensus for headline inflation is now at 7.0%, from 6.6% last month. 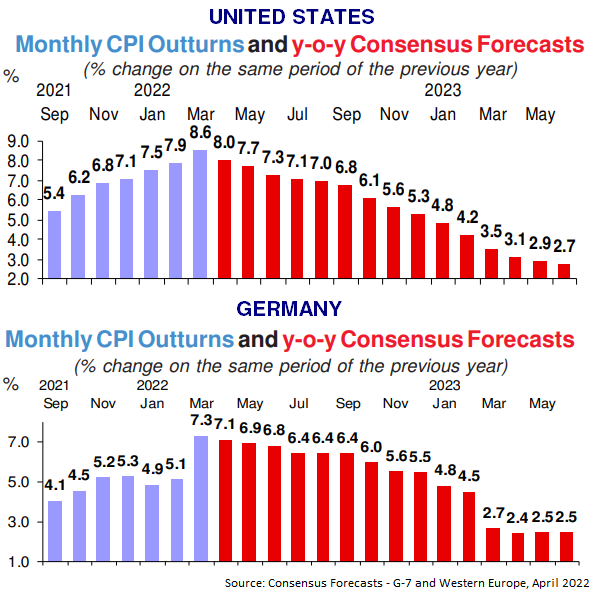 With the Omicron variant causing further Covid disruption across the G7 & Western Europe, forecasts for 2022 Real GDP Growth have taken a hit this month. The GDP consensus for the US, Japan, Germany and the Euro zone started trending noticeably downward in October, when concerns over surging natural gas prices upended initial expectations. 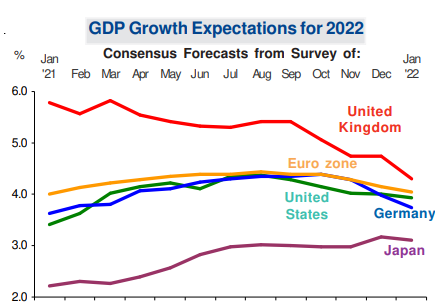 All countries featured except Japan are now seeing 2022 CPI projections of above 3% – and close to 5% for the US and UK. Price pressures crept up for much of 2021 on the back of Covid resurgences and ongoing supply-chain bottlenecks. However, the October jump in energy costs exacerbated concerns that inflation was becoming less transitory (and more entrenched) than policymakers had hoped. Many central banks are now aiming to wind down QE and return to interest rate normalization: the Bank of England at its December MPC meeting raised the Base Rate to 0.25%.

Given the deep economic recessions of 2020, activity ever since has been buffeted by stop-start Covid restrictions. Since late-November 2021, the emergence of a more contagious variant, Omicron, has provoked breakthrough infections in the vaccinated as well as the unvaccinated. Soaring case numbers have put renewed pressure on heathcare systems and resulted in further restrictions. Our panel’s investment forecasts have dropped noticeably in recent months, with Germany particularly affected by global supply-chain difficulties hitting its exporting industries. UK investment has also been curtailed by added Brexit strains.