Once again, U.S. Q1 real GDP growth came in weaker than expected (below the Bloomberg consensus). Real GDP growth is a key input for both public and private sector decision makers, and the first quarter’s soft reading has raised concerns of an economic slowdown. The Federal Open Market Committee (FOMC) will not have the Q2 GDP number at its June meeting, and expectations for economic growth play an integral part in the FOMC’s rate setting decisions.

The Bureau of Economic Analysis (BEA) seasonally adjusts its GDP numbers, but some analysts have raised the question of potential “residual seasonality” in the data. For instance, Q1 GDP growth was the weakest quarter in each year during the 2010-2011 and 2014-2015 periods.1 In addition, for 2014 and 2015, Q2 reported the strongest growth rates for each year. Growth rates of a seasonally adjusted variable should not follow a predictable pattern after seasonal adjustment. Yet real GDP growth, after seasonal adjustment, seems to follow a predictable pattern for certain quarters. Q1 GDP growth rates tend to be the weakest relative to the remaining quarters of the year, at least in recent years. Given this somewhat predictable pattern among seasonally adjusted observations, we consider it important to entertain the notion that the real GDP figures may contain some noise that clouds the true state of the economy. As such, we attempt to confirm statistically the presence of residual seasonality in real GDP growth and adjust the estimates accordingly.

For decision makers, it is vital to obtain the most accurate view of the economy possible, and residual seasonality may blur the actual picture. For instance, the BEA reported 0.5 percent real growth in Q1 2016, and our estimate suggests the properly adjusted number may be closer to 2.6 percent. These two numbers paint very different pictures of the current state of the economy. Furthermore, the FOMC’s reaction to these two pictures would probably be different, as 2.6 percent growth (our estimate) would boost the likelihood of a rate hike in June versus the lower probability of a rate hike with growth of just 0.5 percent growth (BEA estimate), all else equal. 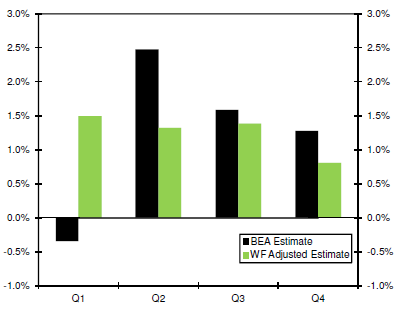 Quantifying the “Residual Seasonality”
Seasonal factors can blur the true picture and sometimes may mislead decision makers. Therefore, seasonally adjusted data are preferred by analysts and decision makers because the seasonal adjustment tends to remove noise and provide a clearer view of the economy.

In economics, the sources of seasonality, including weather (winter versus summer), holidays (Thanksgiving and Christmas, for example) as well as business cycles, can influence the seasonal adjustment process. Seasonal adjustment for typical holidays is straightforward, as Thanksgiving and Christmas always fall in Q4. Weather-related seasonality can sometimes be complicated by abnormalities, such as when a winter season is milder/colder than usual.

Finally, business cycle-related seasonality sometimes can be very difficult to adjust properly, and the Great Recession is an excellent example of this challenge. The Great Recession was the deepest and longest recession in the post-World War II era, and the severity and uniqueness of this event may have created structural changes in the economy that have led to seasonal adjustment challenges. Given this, how can we best quantify residual seasonality?

One way to test if real GDP (or any time series) contains residual seasonality is through the application of a seasonal adjustment tool (X-12-ARIMA method for instance) on a series which has already been seasonally adjusted.3 We refer to the official estimate from the BEA as the “BEA estimate” and refer to the new series (the series we estimate using the X-12-ARIMA method) as the “Wells Fargo (WF) estimate.” If no residual seasonality is present, the difference between the two series should be negligible for the complete sample period. However, if the difference between the BEA series and the WF series is meaningful for the time period under study, then that would be evidence of residual seasonality. 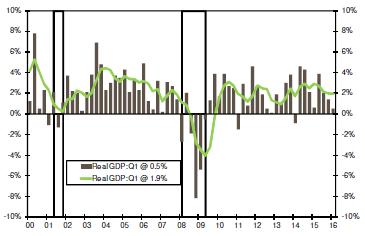 There are a few noteworthy points from our analysis. First, BEA estimates, on average, typically exhibit slower growth in Q1 compared to the WF estimates, and that is true for all three sample periods. Second, for all three periods, BEA’s estimates for the remaining quarters, on average, are higher than WF estimates. Third, average yearly growth rates are similar from the BEA and WF estimates for all three sample periods. Therefore, if we just look at the average growth for the year from these two estimates, the residual seasonality is not immediately apparent. For instance, the average annual growth rate using BEA estimates is 1.84 percent versus 1.86 percent for the complete period. However, the average Q1 growth rate is 0.86 percent according to the BEA estimate and 2.1 percent based on the WF estimate for the complete sample period. Furthermore, the average gap between the BEA and WF estimates for Q1 increases to 1.84 percentage points (in absolute terms) for the 2008-2016:Q1 sub-sample period compared to 1.24 percentage points for the complete period. The wider gap during the 2008-2016:Q1 period between the BEA and WF estimates is an indication of residual seasonality.

In addition, the magnitude of seasonality varies for different quarters and the largest gaps between the BEA and WF are estimated for the 2008-2016:Q1 period compared to the pre-Great Recession as well as complete sample period. That is, for the 2008-2016:Q1 period, on average, BEA estimates are lower for Q1 and higher for Q2-Q4 than those of our estimates. The largest difference (in absolute terms) between the BEA and WF estimates is found in Q1 (the BEA’s estimate is lower by an average of 1.84 percentage points) and smallest for Q3 (the BEA estimate is higher by an average of 0.20 percentage point) along with higher estimates for Q2 and Q4. 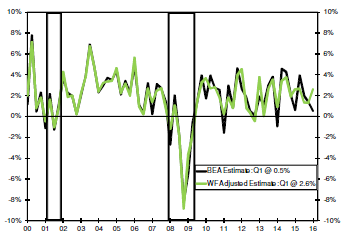 Concluding Remarks: Residual Seasonality in GDP Estimates
Residual seasonality can blur the real picture of the economy and may mislead decision makers in the public and private sectors. Our analysis suggests evidence of residual seasonality in real GDP growth, and that the potential source may be the lingering structural effects of the Great Recession. In our next report, we plan to apply the procedure developed in this analysis on the major components of GDP (consumption, investment, government expenditure, net export and inventories for example) with an eye toward determining which sectors suffer the most from residual seasonality. Stay tuned!

Notes:
1 2012 was an exception as Q1 GDP growth rate was the strongest for the year. In 2013, only Q2 growth was weaker than Q1.
2 We employ SAS software, and SAS utilizes the Census Bureau’s X-12-ARIMA release version 0.3 to seasonally adjust a series. See footnote 3 of this report for more detail.
3 We utilize SAS to re-adjust GDP and according to SAS/ETS 13.2, the X-12 procedure includes improvements on X 12-ARIMA methods that are incorporated into the X-13 ARIMA-SEATS program. For more detail see SAS/ETS 13.2: http://support.sas.com/documentation/cdl/en/etsug/67525/HTML/default/viewer.htm#titlepage.htm; Note, the U.S. Bureau of Census recently developed (in 2013) the X-13 ARIMA-SEATS and it improved the previous used seasonal adjustment methods such as X-12-ARIMA. For more detail see the U.S. Bureau of Census website: https://www.census.gov/srd/www/x13as/.