Visibility on the key policy parameters of the Indonesian economy is starting to fade as we move into mid-year. Although we are relatively confident in our below consensus growth and above consensus inflation forecasts, the all-important policy forecasts are becoming particularly opaque at this time. The government is succeeding in its policy of ‘leaning in’ on Bank Indonesia to cut rates, with a larger reduction in lending rates than we expected in Q1 now becoming more likely. Indeed, we have factored in an additional 25bps of expected monetary policy easing to our rates profile as a result of a more coordinated approach to boost lending between the government and Bank Indonesia.

Where policy is not succeeding, certainly not co-ordinated or cohesive, is in the piece-meal drip-feed economic stimulus packages. The government has announced 11 Stimulus or Economic Packages since September 2015 in an attempt to bolster growth, using the policy tools within its immediate reach.

This makes the all-important fiscal position a particularly difficult one to gauge. The measures that have been announced are largely microeconomic and focus on fairly truculent and embedded regulatory and institutional behaviours. Where there are changes to revenue (via income tax concessions) or outlays (via spending on public works or removing subsidies) they are in areas that we would consider ‘low-multiplier’ spending. We feel that fiscal policy would have been more effective and the economy better serviced by a ‘big-bang’ fiscal policy announcement that contains genuine stimulus such as high-multiplier public works spending, infrastructure, and government spending that directly creates demand for both goods and labour.

A further complication is the lack of ‘costing’ on the 11 stimulus measures. Although we expect that these will likely be quantified in the 2016 Budget review, which has now been pushed back to May, the magnitude of fiscal slippage is potentially being underestimated by observers of the Indonesian economy at this time. Interestingly, business and consumer confidence actually rises when stimulus announcements are absent, suggesting that consumers and corporates are ‘seeing through’ these packages as not being true stimulus.

The Government Leans in on an Impassive Economy
The sheer number of stimulus measures announced has allowed Indonesian policy to appear disjointed, uncoordinated, and driven by multiple and varied interests. However, one common thread is becoming increasingly visible: protectionism. This has been evident across the policy spectrum, but most notably in a range of fiscal policy measures and the Foreign Direct Investment Review list.

Though we anticipate an investment-led growth rebound in 2016-17, the quality of growth will fall short of the quantity. Investment appears to be finally gaining ground this year on the back of the high-speed rail project, but consumption appears at risk of a continued slide. The parlous state of the Indonesian economy is best indicated by Bank Indonesia’s February decision to cut all three of its interest rate instruments and to unexpectedly make a deep 100bps cut to the primary RRR. While we see this broad thrust of easing measures as the Bank’s ‘leaning in’ to coordinate with the government in stimulating the economy (lending in particular), we are not convinced that this is the ideal policy mix to support that goal.

Statements from both the bank and the government indicate that the government is looking for more ‘coordination’ between the central bank and themselves in supporting economic growth. To be sure, coordination of macroeconomic policy is not a bad thing. Indeed, it adds to the efficiency of each policy instrument and allows greater policy flexibility when the various macro arms of policy are working in synch. However, this is not really occurring in Indonesia, particularly from the fiscal side, where stimulus has been piecemeal, poorly designed, and in many cases yet to be implemented. Hence, our expectation for some time has been that monetary policy will need to do the heavy lifting to support the economy in 2016.

Figure 1: Will Investment Finally Fire in 2016 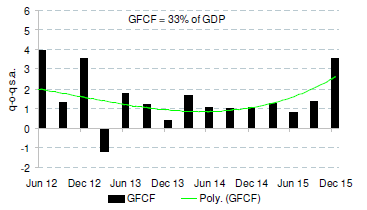 In less than a year, 11 separate ‘stimulus’ packages have been announced that run the gamut of power pricing, foreign direct investment, logistics, and infrastructure. The 11 stimulus measures are more ‘micro’ than ‘macro’ focussed and hence have lacked the ‘big bang’ announcement effect the Indonesian economy most likely needs for fiscal policy to generally gain traction.

To date, neither individually nor as a sum have the stimulus packages addressed the root cause of Indonesia’s economic malaise – the lack of private and public investment. The lack of medium-term visibility on the economic outlook, which, to be fair, is largely driven by external as well as internal factors, will likely see private investment hampered. Indeed, we are finding evidence that as public investment makes a tentative recovery, it is crowding out private investment at an unusually early stage in the investment cycle. Moreover, though investment is expected to turn up, the bulk of the Indonesian economy relies on private consumption, which still appears to be at risk.

Big-ticket reforms are still absent in Indonesia and the economy is not going to enter a self-sustaining recovery until these are enacted or fall into place. The overall thrust of the stimulus measures appears marginal and are unlikely to bolster confidence or activity significantly. The measures announced so far include modest reductions in fuel prices, electricity tariff discounts, simplified procedures for business permit applications, and reduced administrative and regulatory requirements for banks in handling foreign currencies, particularly those from export proceeds.

At the same time, we find private consumption fundamentals deteriorating on rupiah weakness and higher food prices. Private consumption, which represents around 55% of GDP in Indonesia, has the potential to be a stabiliser for growth. Unfortunately, local purchasing power has been eroded significantly in 2015 by rising commodity prices (agricultural related) and declining rural incomes for agricultural producers. Moreover, the sharp decline in the rupiah has led to a significant decline in average purchasing power.

External demand also unlikely to be fired up. Indonesia is the ASEAN economy bearing the brunt of China’s slowdown as it is largely an undiversified commodity exporter. With a large proportion of the country’s commodity exports going to China and low substitutability, Indonesia is experiencing the sharpest year-on-year contraction in exports and imports among all the ASEAN economies. We expect this dynamic to continue as long as the Chinese economy slows; hence external demand will not come to the support of the Indonesian economy anytime soon.

Figure 2: Even if Capex Fires, Consumption May Continue to Weigh 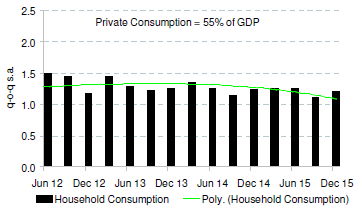 Finally, a monetary policy conundrum or two. Bank Indonesia appear to be leaning heavily on cutting the Reserve Requirement Ratio (RRR) to return liquidity to the banking system in an effort to boost lending. Indeed, following February’s RRR cut, Bank Indonesia expects the banking system to get an additional IDR34tn from the 100bp RRR cut, returning deposits, which potentially can be lent, to the system.

Cutting the RRR will return deposits to banks to potentially lend. However, cutting the deposit rate will not attract new deposits. Indonesia already has a rising loan-to-deposit ratio (LDR) currently sitting at 93% as of November 2015, up from 89% in May 2015, and if such a pace is sustained, the LDR will be approaching 100% in late 2016 or early 2017.

With this in mind, the RRR may be relied on less, and an additional 25bps of easing (on top of the further 25bps we already expect) now seems likely in 2016.

A final policy dynamic that needs to be watched is the recently announced cap on deposit rates. The Financial Services Authority (OJK) has imposed a maximum limit on time deposit rates for banks at 100bps above Bank Indonesia’s policy rate in an attempt to reduce the cost of funds by lowering lending rates. However, we are mindful that this could have the unintended consequences of further easing deposit growth and tightening liquidity. Capping deposit rates hence limits the ability of the banking system to grow the deposit base at a faster pace, in our view.

Focus: Assessing the Stance of Policy
The stance of macroeconomic policy for any economy can generally be assessed on four fronts: 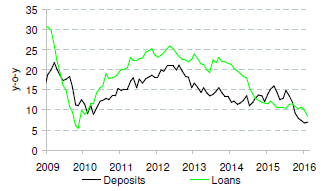 In the past quarter, we have seen considerable action on all four fronts, some expected, some unexpected. Although a co-ordinated and multi-pronged policy approach should be welcomed as the sum is generally greater than the parts, we are not so sure that recent policy action in Indonesia may uniformly be supportive of the economy. We note that tensions and countervailing influences are apparent in the current policy stance. Indeed, we further note that the two major policy arms are approaching either self-imposed or likely market determined constraints that could limit policy flexibility going forward.

Monetary Policy: In the monetary policy space, there is much more evidence of the government and Bank Indonesia ‘working together’ to lower lending rates across the economy. This was most evident in Bank Indonesia’s decision in February to cut all three of its interest rate instruments and unexpectedly make a deep 100bps cut to the primary RRR. As we noted at the time, we are not convinced that this is the ideal policy mix to support that goal.

Indonesia is one of several ASEAN economies suffering from either local currency deposit contraction or a significant slowing in local currency deposit growth. A monetary policy action that is tilted towards boosting lending growth will see Indonesia experience a particularly fast rising loan-to-deposit ratio (LDR) in the coming quarters. Why do we view this as a constraint to monetary policy? Basically when the LDR rises above unity, the banking sector is no longer able to rely solely on domestic savings to fund lending. It typically has to tap wholesale foreign markets or raise capital via the equity market in such a situation. Potentially then, a rising LDR could see Indonesia having to make an additional call on international capital markets – in addition to funding its twin deficits.

Fiscal Policy: Given that the 2015 Budget was largely ‘inherited’, having been prepared by the outgoing SBY administration, the revisions to the 2015 Budget and the draft of the 2016 Budget were the first opportunities for the Jokowi administration to incorporate his vision and imprimatur on the fiscal books and guide public spending towards the Jokowi Development Agenda. Fiscal policy is slipping and there is a self-imposed deficit limit of 3% of GDP. With the 11 stimulus packages largely un-costed, with the market price of oil well below the government’s revenue estimates, and with the tax amnesty (attempting to attract money illegally syphoned offshore back into the economy) not generating anywhere near the over optimistic revenue estimates, there is little fiscal policy space for the government to maneuver in. We believe that the budget deficit will widen from 2.5% of GDP in 2015 to around 2.8% of GDP in 2016 purely based on parameter shift to date. Any further slippage in growth (suppressing revenues and likely requiring higher expenditures) or further declines in commodity prices (suppressing the revenue take both from a corporate profit and tax perspective) will leave the government with very little fiscal space to address any further slowing in the economy.

Though the government has announced that any revisions to the 2016 Budget have now been pushed back to May, we already find evidence that government policy and spending to date may already be suppressing (“crowding out”) private investment. Such a dynamic will further complicate the point at which the Indonesian economy sustainably recovers.

Figure 4: As LDR Rises Above 100, Need for Foreign Capital Will Rise 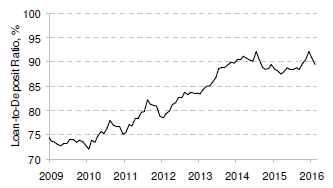 This article was reproduced with permission of the Australia and New Zealand Banking Group Limited. It was originally published as “Indonesia Q2 Update: the Approach of Policy Constraints?” on 5 April 2016. The information in this article is provided for information purposes only, it is general in nature, does not take into account the objectives, financial situation or needs of any person and is subject to the ANZ General Disclaimer which is available on the ANZ website [http://anzlive.force.com/ANZGeneralDisclaimer].