Outcome of Referendum is Highly Uncertain
The UK will hold a referendum on whether to remain in the EU on 23 June. There is a high level of uncertainty about the outcome of the referendum. Moving averages of the outcomes of the main polls show that the Remain camp are in the lead, but the gap is not very big, especially considering how unreliable the polls are. So although we think it is most likely that the British public will vote to remain in the EU, we see it as a relatively close call. Given this, we set out a number of scenarios below and assess the implications for the economy and financial markets in each.

Four Brexit Scenarios
The chart below sets out the scenarios. We attach a 65% probability to our base case that the UK will remain in the EU, leaving 35% for the alternative Brexit scenarios. In our Brexit scenarios we focus on the impact on the economy and markets through to the end of 2017, even though negotiations between the UK and EU may last for longer than that (around 2 years leading up to a possible exit in 2018H2 and possibly more years after the exit). However, we assume the effects in the next year or so will largely be based on expectations about the eventual outcomes as well as the uncertainty surrounding the process.

We think it is most likely that any post-Brexit negotiations will be very difficult creating the expectation that there will ultimately be restrictions on trade compared to the current situation. We therefore attach a 20% probability to a Messy Brexit scenario and a 15% chance to a Smooth Brexit scenario, where expectations form that the adverse effects on trade will be limited. Finally, we also see a chance in either of these two scenarios that a UK Brexit could bolster anti-EU movements across the continent leading to a re-escalation of the euro crisis. So we split the Smooth and Messy Brexit Scenarios each into a variant with EU contagion and one without.

Base Scenario: the UK Remains in the EU (65%)
Our base case is the UK public will vote to remain in the EU. Although the governing Conservative party is split down the middle, the official government recommendation is that the public votes to remain in the EU. The Prime Minister, most of the Cabinet, as well as most other political parties, will campaign to remain. In addition, the Remain camp looks to be just ahead in the opinion polls.

In such a scenario economic growth slows in the first half of this year as uncertainty ahead of the referendum hurts investment and adds to the headwinds from the global economic slowdown. The BoE remains on hold given the slowdown in growth and weak inflationary pressures. The economy regains traction after the referendum as uncertainty lifts and as the global economy improves modestly.

Overall, we see UK GDP growth at 1.6% this year (down from 2.2% in 2015) before rebounding to 2.5% next year. The economic impact on the eurozone is negligible. The main market impact is on the sterling exchange rate, with GB£/US$ falling to 1.35 in the run-up to the referendum, but rebounding afterwards (to 1.48 by year end) as the Brexit risk premium is unwound. EUR/GB£ rises somewhat further to 0.78 pre-referendum (the fall-out is limited by further ECB easing) before falling back to 0.71.

Chart 1: Scenarios Following the UK Referendum on the EU

Brexit Scenario 1: Messy Brexit, No EU Contagion (15%)
Our first scenario is the likeliest of our four Brexit Scenarios. In this scenario a vote to leave the EU in the referendum is followed by extremely difficult, heated and acrimonious negotiations between the UK and the EU on the terms of its withdrawal. The tone of the discussions is such that businesses and investors reasonably assume that there will not be a constructive agreement that secures the continuation of free trade between the UK and the EU, and adjust their decisions and plans accordingly.

Although it is in both the UK and EU’s economic interest to agree on free trade, some EU countries may want to try and gain a competitive advantage for their financial sectors. More importantly, the EU may want to drive a tough bargain with the UK in order to dissuade other countries from following the UK’s path out of the EU. At the same time, the UK would not be willing to accept free movement of people and other regulations necessary in order for it to have full access to the EU market. The situation could also become more complex as Scotland decided to have a second referendum on whether to stay part of the UK. The Scottish people are pro-EU according to polls, and Brexit might be the straw that breaks the camel’s back in terms of it remaining part of the UK. Fortunately though, Brexit does not lead to ‘exit’ contagion to other EU countries.

The uncertainty and concerns about future restrictions on trade between the UK and the EU and Scotland and the rest of the UK would lead to sharp falls in business investment, not least foreign direct investment, as well as less hiring. The UK economy would likely fall into recession and the BoE would then resume its monetary stimulus. Sterling and – to a lesser extent – other UK assets (equities) more generally could build even larger risk premiums, leading to a slide in their value. There would also be some moderate effects on the eurozone economy, due to less UK demand and the sharp fall in sterling.

Chart 2: Poll of Polls on UK’s Future in the EU 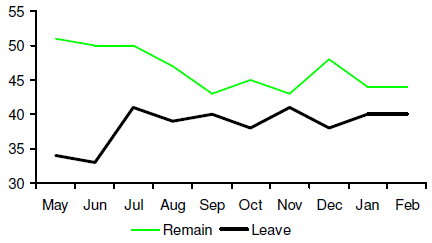 Brexit Scenario 2: Messy Brexit with EU contagion (5%)
This is the most adverse Brexit scenario in our view. During the Messy Brexit set out above, there would also be severe political ramifications for the rest of Europe. Brexit could encourage anti-EU movements in other member states, which could put pressure on other governments to hold votes on the issue. This would especially be the case given that Brexit would not be occurring in a benign environment.

Political risk is on the rise throughout Europe. A cocktail of poor economic performance, high unemployment, austerity and concerns about immigration have led to political fragmentation in Europe. The popularity of radical parties on all sides of the political spectrum has risen. This is making it more difficult to form effective governments, while also increasing the chances that a radical party has a strong influence on government policy.

So a UK decision to leave the EU would add fuel to an already existing fire, with investors starting to have more serious concerns about the future of the EU and single currency. This could lead to a re flaring up of the euro crisis, leading to severe financial stress and broader slowdown in European economic growth. In this scenario, the risk of deflation would rise sharply and the ECB and governments would need to work very hard to reverse the downturn.

A re-escalation of the euro crisis could see eurozone GDP growth around 1.5 percentage points lower than in our base case in 2017, meaning it would be zero on average. UK GDP growth could be an extra 0.5 pp lower on top of the direct Brexit effects described above. We would see euro weakness in the currency markets. EUR/GB£ could fall back to around 0.85 after the original rise due to Brexit. EUR/US$ would eventually drop below parity.

Brexit Scenario 3: Smooth Brexit, No EU Contagion (10%)
This is the most favourable Brexit scenario. A vote to leave the EU in the referendum is followed by constructive and positive negotiations between the UK and the EU on the terms of its withdrawal. This leads to optimism that the trading relationship will not be damaged significantly following a Brexit. It could be that the UK and EU are willing to meet somewhere in the middle, where the UK gets significant access to the single market, but is still willing to accept many EU regulations, perhaps with restrictions on free movement of people. The constructive atmosphere could stem from the view that each side would loose from a messy negotiation and a breakdown of free trade. In addition, there is no ‘exit contagion’ to the rest of the EU or Scotland. 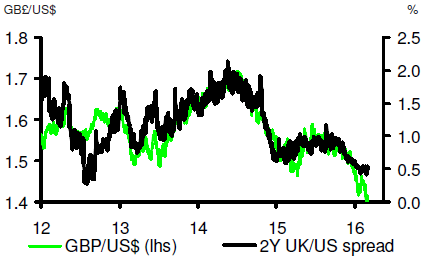 Although the UK economy would still suffer a significant slowdown in this scenario, the uncertainty would be limited. Therefore the slowdown would be shallower and be over more quickly than in the messy Brexit scenarios. Sterling would also still fall broadly but the decline would be more modest and would partly reverse more quickly.

Overall, we project that UK GDP would be around 1 percentage point lower in 2017 than in our base case. We would expect GB£/US$ to fall to around the 1.30 level and EUR/GB£ would rise to 0.85 at end-2016. The negative effect on eurozone GDP next year of such a scenario would probably be modest.

Brexit Scenario 4: Smooth Brexit, With EU Contagion (5%)
During the Smooth Brexit set out above, there would also be severe political ramifications for the rest of Europe (as described in Scenario 2). The Eurozone economy would suffer due to the euro crisis, while there would be knock-on effects on the UK on top of those from a smooth Brexit.

Overall, we project that both eurozone and UK GDP would be around 1.5 percentage points lower in 2017 than in our base case. We would expect GB£/US$ to fall to around the 1.25 level. EUR/GB£ would fall back to 0.80, and EUR/US$ would fall to around parity as the euro is dragged down by fears for the future of the single-currency bloc.

Chart 4: EU Barometer on Views of Future of EU in Selected States 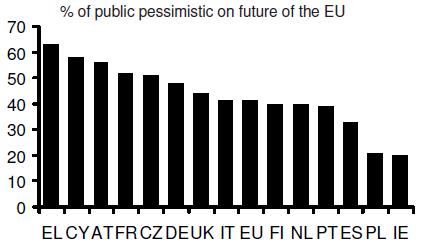