The sharks have been circling commodity markets for a while now, with large bites taken out of the prices of oil and many metals. However, commodity markets often overshoot, and looking beyond the very near term there are good reasons to dip a toe back in the water.

Even with China continuing to slow, growth in other emerging markets shouldn’t be as bad as 2015. Add in a further modest acceleration in Europe, and global growth should be a bit better this year and in 2017. And with supply finally starting to fall off in some areas, modest price recoveries should be in the cards as the market eyes brighter days in 2017.

Fragile China
Modest will be as good as the recovery in prices gets, however. When commodity prices rebounded quickly following the Great Recession, that was in large part due to the massive stimulus effort and infrastructure led growth in China. But the expansion of the Chinese economy during that period was unprecedented, both in terms of the growth rates achieved and also what that meant for commodity markets.

Looking at how China’s recent expansion stacks up against the development path of two other key Asian economies during the post-war period (Japan and South Korea) highlights just how unprecedented expansion in the Middle Kingdom has been (Chart 1). The experiences of Japan and Korea also highlight that a slowdown of growth at this level of GDP per capita is often typical, as economies transition to more domestically and service-orientated drivers.

From a global growth viewpoint there are some positives to be seen. Emerging markets that suffered the greatest pain in 2015 (Brazil being a stark example) are unlikely to fare as badly this year and next. And, in India, the global economy has another potential catalyst of growth lined up.

But even then, there are signs that the upturn will be a modest one for commodities. India is already more advanced than China was at the start of its rapid accent (Chart 2, left) and its economy is much less manufacturing-driven (Chart 2, right).

From a supply point of view, it appears that the news is not as good for some metals as it is for oil. Indeed with further supply coming onto the market in 2016 and 2017, an excess is likely to remain for the likes of copper and aluminium (Chart 3). That should limit the rebound in prices in those areas compared to oil, where a sharp decline in US production is expected to be a swing factor later this year and into 2017.

Chart 1: Slowdown in China Unsurprising Given Historic
Examples and Stage of Development 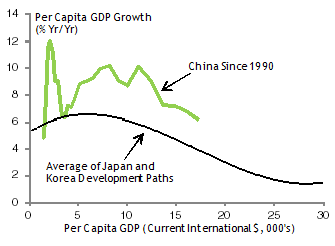 Crude Aspirations
Oil has taken a beating that’s lasted its fair share of rounds. But we’re holding out hope that by the second half of this year, it will have picked itself up off the mat, with a path back to balance coming into focus (Chart 4).

Despite the miserable performance of prices, and the anemic global growth backdrop that has plagued other commodity prices, it was a strong year for oil demand growth in 2015. The 1.8 mn bbl/day average increase was twice as large as was assumed at the beginning of last year. Low prices played a role in boosting demand, and for this year, the IEA is forecasting growth of over 1.0 mn bbl/day. That increase is doing the heaviest lifting in bringing us back into balance by Q4.

On the supply front, the biggest swing factor was OPEC. The group’s total production is over 1.5 mn bbl/day higher than at the beginning of 2015, bringing the group as a whole closer to its capacity. For this year, we’re mindful that Iran is expected to increase production by 500K bbl/ day, while Libyan production stands well beneath pre-war levels.

Although some OPEC members looks determined not to cede market share, elsewhere, US production is slated for further declines. Recent figures have been bolstered by a surge in productivity, which has offset the drop in rigs. Companies have been exploiting their best shale plays, and cost cutting is helping drillers get more bang for their buck.

But at the same time as firms are squeezing more out of what they have left, the decline rate of existing wells has accelerated further. At the current pace, without new drilling, US production would fall by a million barrels a day every quarter. Furthermore, financing issues may also limit available funds going forward as the high yield market suffers through recent turmoil. The US Department of Energy suggests that domestic production should decrease by close to 400K barrels over the next year. That is a conservative estimate, with CIBC Sector analysts placing the likely decline in the 500K-700K bbl/day range. 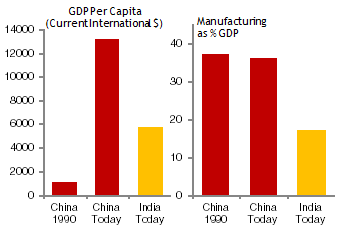 Balance may bring prices back to US$55-60/bbl by the end of this year. But for Canada, that may not mean the return to headier days. The past five years have come with discoveries of cheaper alternatives to oil sands. Though still one of the largest deposits in the world, full cycle costs for Canadian oil production are on average around US$10/bbl higher than where oil prices are likely to stand by the end of 2017.

Balmy Winter Slams Nat Gas
For those of us living in the north east, we had little to complain about this December. But the balmy weather slashed demand for natural gas, to such an extent that it was the second most extreme month in over 20 years of data. However, natural gas wasn’t having a great go of it before then either, with strong supply growth keeping a tight lid on prices.

Looking forward, more normal weather should chew into the high inventory levels that prevail at the moment, with Henry Hub prices likely to show little upward momentum until some of that slack is drawn down. On the supply front, growth is forecast to stall by the middle of this year, a bullish factor for what should be a return to prices more commonly seen over the last five years by 2017.

Iron to Struggle: Supply/Demand Still Diverging
Oil caught the headlines, but iron’s fall has been just as impressive. Unfortunately, curtailed investment in the marginal producers will have a longer response time to supply, with prior investments still feeding through into the iron market. That’s still likely to weigh on prices, as demand from Chinese steel production is poised to slip further. The path to balance in iron ore appears to be a long one.

Other Metals Not “Ferring” Much Better
We’re optimistic that Chinese policymakers will be able to buttress the economy from the worst of the current slowing. But the Middle Kingdom’s role in export markets is even more pronounced than its share of consumption. As seen before, oversupply is an issue across the commodity complex and specifically for non-ferrous metals. Furthermore, elevated inventory levels pose another acute challenge for these commodities.

Chart 3: Path Back to Balance Looks Shorter
for Oil than Aluminium and Copper 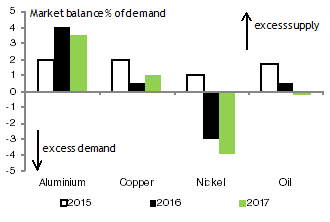 For copper, inventories have been coming down as a share of annual consumption, with global LME inventories in particular down close to 40%. Low prices are curtailing the amount of copper that is supplied through recycling channels, and producers have already announced plans to slow output. Still, the market remains oversupplied, and Chinese industrial demand is set to remain slower than previously seen.

That story is partially echoed by what’s happening with zinc, with total stocks for that metal edging lower. Zinc is also least dominated by China, and is used in steel coating in the out-performing automotive industry. That gives it the potential so see more constructive demand dynamics as car sales globally remain strong. Furthermore, supply should shrink somewhat as older mines are retired.

The inventory dynamics for aluminum and nickel are, on the other hand, less constructive for prices over our forecast horizon. Nickel’s 40% or so drop in prices last year makes roughly 65% of current supply unprofitable according to CIBC equity analyst estimates. There are already signs of production curtailments, meaning an eventual supply response will play a role in bringing the physical market back into balance.

However, even if the market is in better balance for nickel in 2016, the stock overhang is a headwind to a meaningful rally. The story is similarly bleak for aluminium, where market balance might only be seen in several years.

Potash Prices Planted
For potash, longer-term dynamics are still supportive. Although China’s rotation toward consumer-led growth is a negative for metals, a richer consumer augurs for more protein-rich diets, and is a constructive force for potash prices. That being said, near-term prices are likely headed lower than we’ve seen recently. The Chinese contract settlement will likely come after the Chinese New Year in February. Given higher inventories, and the recently weakened Renminbi, expect lower dollar-denominated pricing. Look for an average price of US$250/mt in 2016, and a move to US$265/mt in 2017 as production discipline bears greater fruit. 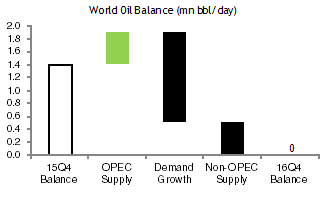