The federal budget FY13/14 tabled on February 28, 2013 was pragmatic and balanced, though meeting the targets will depend on recovery in growth, conducive external markets and a political will to stay the course.

Looking backward, the FY12/13 fiscal deficit was contained at 5.2% of GDP, slightly better than the (revised) target of 5.3%. For FY13/14, the target has been set at 4.8%. With further evidence on hand that GDP growth is still to find bottom and a sharp cutback in expenditure could only deepen the slump, the government proposed a 16% increase in overall expenditure for FY13/14, after this year’s revised estimates were 4% below budgeted figures.

The budget and efforts to mobilise revenues should address credit rating agencies’ concerns in the near-term and significantly lower the risks of a downgrade. The ability of the government to follow through will be watched closely. Moreover, with growth assumptions still on the bullish end, risks of an overshoot in the deficit targets remain.

The central bank, meanwhile, signalled cautious approval of the budget though it is unlikely to accelerate monetary easing with the current account in deficit. We continue to expect 75 basis points of cuts spread evenly over the remainder of 2013.

Not an Austere Budget

Against a backdrop of slowing domestic growth and run-up to next year’s elections, the Budget did not propose any meaningful expenditure restraint. Much of the 16% increase in total spending stems from a one third rise in Plan expenditure, which is positive for growth as it implies funding of specific schemes and projects with multiplier effects alongside transfers from the central to the state governments. In contrast, non-plan expenditure (which includes items like subsidies, defence etc) is estimated to rise by 11%. 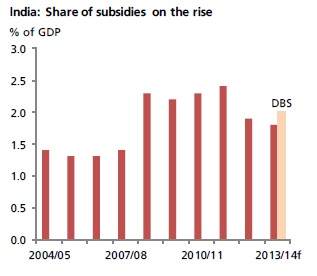 While the headlines are positive, the direction on subsidies remains worrisome. Despite the partial re-regulation of diesel prices earlier this year and the sharp increase in some administered prices, the revised estimate of FY12/13 subsidies will exceed the original target by 36%.

For FY13/14, a 10.3% reduction in the subsidies has been proposed due to a smaller bill from petroleum allotments. This seems doable after oil marketing companies were allowed to raise the retail diesel prices to lower their under recoveries and LPG ceilings were imposed. However, this could be undercut by rising food subsidies, arising mainly from the Food security bill. The Budget has set aside INR 100bn as initial funding for the programme (<0.1% of GDP), though the programme could surge to INR 830bn, according to the National Advisory Council estimates, pushing up the overall subsidy bill accordingly. Subsidies are targeted at 1.8% of GDP; we think an outcome of 2%-2.1% of GDP is more likely.

Proposals to Generate Revenues, Though Challenging to Meet

To fund the anticipated jump in spending, the Budget also proposes to mobilise fresh revenues. Ambitious targets have been set, with a 23% jump in receipts assumed for FY13/14, the bulk of which is expected to be raised by revenue receipts (tax and non-tax).

Some of the key pro-investment and revenue proposals include:

1) Income tax thresholds were left unchanged apart from the introduction of a small tax credit for the lower bracket. Meanwhile, a surcharge of 10% on rich taxpayers (earning above INR 10mn annually) was initiated;

2) Other initiatives in the direct tax spectre: 10% surcharge on high value domestic companies, with foreign establishments to incur another 5%. Also relevant was the withholding tax of 20% on dividends;

3) On indirect taxes: select customs and excise duties were tweaked, but the normal rates of 12% were left unchanged. After a double-digit increase in excise duties on cigarettes in the previous budget, this sector was subjected to 18% hike this time around;

4) Positive for investments was the move to provide investment allowance to companies making substantial investments in plant and machinery in FY13/14;

6) Classification changes in investments to be categorised as FII/FDI.

These changes are expected to improve the tax to GDP ratio from 10.4% in FY12/13 (revised) to 10.9% in FY13/14, though set against the backdrop of slowing growth, high borrowing rates and under-pressure corporate margins, achieving the target could prove to be a tall order. An outcome closer to 10.5% is more likely in the next fiscal year. Meanwhile after tasting success in a belated push to raise divestment proceeds, the government expects to raise INR 408bn next year with one-third coming from telecom spectrum sales. This will prove challenging if FY12/13 is any guide.

The negative current account position received a mention in the opening lines of the budget speech last month. However there were no direct steps undertaken to bridge this gap, with the follow-up increase in excise duties of gold/ precious metals also failing to make an appearance. This is important, especially, as the Oct-Dec CAD is close to hitting the upper band of 5.5%- 6.0% of GDP, exceeding our previous estimate. With a view to reducing the deficit and mobilizing households savings, the government chose to liberalise resident investments under the Rajiv Gandhi equity scheme alongside permitting government/corporate bonds as collateral to meet margin requirements, to name a few. Here too, the anticipated reduction in withholding tax on income from debt investments did not materialize and FII debt ceilings were left unchanged. With non-resident holdings making up less than 10% of total government debt, there is room for this avenue to be tapped further. 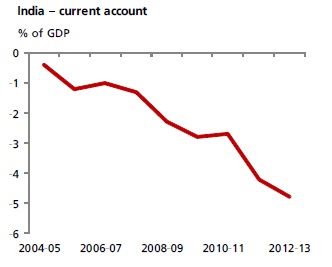 Juggling Act to be Scrutinised Through the Year

Domestic stock markets tumbled more than 1.5% in wake of the announcements on Thursday February 28, weighed by concerns over an increase in spending outlays, higher taxes and higher bond issuance. Bond markets also reacted negatively to the news of the gross bond issuance set at INR 6.3trn.

In terms of the immediate risks, February’s budget should mitigate downgrade fears for the near-term. The overall tone of the budget and efforts to mobilise revenues should address the rating agencies’ concerns in the near-term, alongside tighter deficit targets. This lowers the risk of a ratings downgrade in the near-term, with execution risks to be eyed next. S&P noted that the budget was ‘relatively prudent’ and ratings neutral.

While a slower pace of fiscal consolidation could support growth, last month’s measures are unlikely to trigger fresh investment spending. Q3 GDP meanwhile surprised to the downside at 4.5% (y-o-y), with the momentum putting at risk the government’s FY13/14 growth projection of 6.1%-6.7%. A half point drop in GDP growth would likely bring a similar rise in the deficit/GDP ratio.

The government hopes that the fiscal consolidation efforts presented last month will encourage the central bank to hasten the pace of monetary stimulus. We suspect it will remain cautious. We continue to envision 75 basis points of policy rate cuts spread evenly over the remainder of 2013.