One reason for the latest sharp fall in commodity prices is the fear of an economic slump in China. However, up to the end of June at least, China’s demand for commodities has barely decreased so lower commodity prices were not an indication of an even weaker economy. Rather, global supply has continued to rise in some cases. As many production facilities are meanwhile unprofitable, supply should drop again soon. Consequently, prices should be higher again by the end of the year – provided the economy in China does not slump, as we expect.The economic situation is not good in China at the moment: the equity market bubble has burst and the unofficial Purchasing Managers’ Index at least is currently well below 50, which actually signals shrinking industrial production. This bad news from China is certainly one reason why commodity prices have plunged recently. The price of a barrel of Brent has dropped by more than 20% since the beginning of July. The LME index, which measures cyclically-sensitive base metal prices, began to tumble already in May; since then, it has shed almost 20%.

More and more investors are asking themselves whether this price slide might indicate a slump in demand and economic performance in China or that emerging markets in general are possibly in a much worse shape than generally assumed. The figures available do not give any signs of this.

Crude Oil: Fight For Market Shares + Fear of Iran’s Return
The situation with crude oil is clear. Although demand for crude oil dipped by 0.2 million barrels a day in the second quarter according to data from the International Energy Agency (IEA) and our own seasonal adjustment, it was higher than expected at the start of the year and the trend is still pointing upwards. This is at least the case up to June – more recent figures are not available – and also for China’s oil imports. 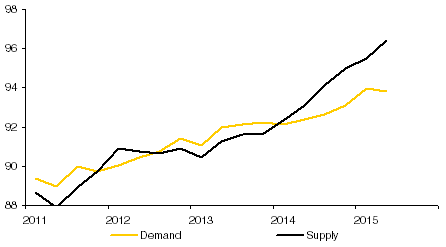 The decisive factor for the ever-increasing oversupply since the beginning of 2014, which had a huge impact on the oil price – like in the years of substantial demand overhang in 2007/08 and 2010/11 – is the sharp rise in oil supply. According to the IEA, oil supply in the second quarter was more than five million barrels a day higher than two years before. The reasons lie in the fracking boom in the USA and the very strong increase in OPEC production in response to this. While US production has fallen slightly recently, OPEC increased its output again in July according to the Reuters survey, and global production in July has therefore probably expanded again. Added to this was the expectation that Iran would export much more oil again soon following the nuclear agreement and oversupply could tend to rise again.

Base Metals: Demand Weakens in Part, But No Slump
Less clear is the picture for base metals. In the case of copper – often seen as the best economic indicator among base metals – global consumption has not climbed since spring 2014 after an upward trend for many years. In the case of nickel, consumption actually plunged between spring 2014 and spring 2015. This trend has certainly been a contributing factor – alongside a further increase in supply initially – behind prices of these commodities falling sharply overall since spring 2014.

That said, there are no signs yet of a near-term slump that could have triggered the latest price slide. China’s copper imports continued their sideways trend in June. Global demand for nickel has even taken a leap recently because China is increasingly buying refined nickel on the global market; previously imported nickel ores, from which nickel is then produced in China, have become scarce since the Indonesian export ban.

Aluminium consumption has actually picked up strongly again since mid last year. In May, 750 thousand tons more was consumed than a year ago, although supply here is apparently rising at an even stronger pace. According to industry sources in China, which accounts for almost 55% of global output, new production capacities of more than 2 million tons per year were put into operation there in the first half of the year. A further 3 million tons p.a. are set to be commissioned in the second half of the year. Aluminium demand in China is not keeping up with supply and the resulting oversupply will be exported. 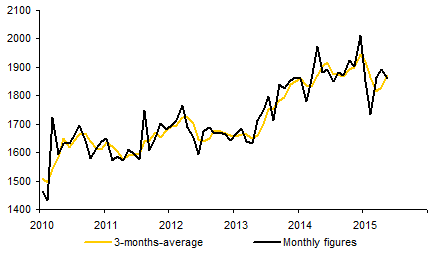 Price Slump Presumably More Based on Fear Than Fall in Demand, …
As the data for July are not yet available – the import figures for China will be published in the coming weeks – there is of course a possibility that the slide in commodity prices has actually been exacerbated lately by much weaker demand from China. However, in the first few weeks – up to the end of June at least – the price slide was apparently driven more by the fear of a slump in demand from China than an actual notable slump in demand. Moreover, in the case of many commodities – especially crude oil – supply has tended to rise, resulting in a substantial oversupply. The concerns of investors are also reflected in their positioning. “Speculative” net short positions in copper are at their highest level since mid-2013 while net long positions in US WTI have dropped to their lowest level since the end of 2012.

Besides the bad news from China, the stronger dollar is also likely to have weighed on commodity prices. Unlike versus the euro, the dollar has strengthened considerably against commodity currencies since mid-May and there has been quite a stable negative correlation between the US dollar and commodity prices for years. 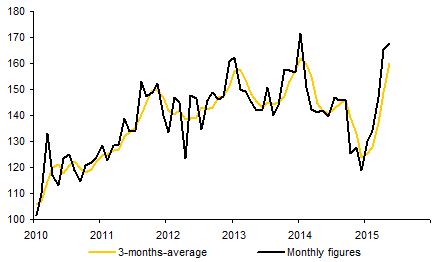 … Which Should Not Happen
We have often referred to the problems in China in our Week in Focus over the past weeks and months and we still see a risk that the Chinese economy – based on the reality if not official statistics – will undershoot our growth forecast of 6½% for this and the coming year. Even so, a slump in economic growth is still not our baseline scenario. Instead, we expect the economy – and thus also the demand for commodities – to stabilise amid further monetary easing and additional fiscal stimulus programmes. The fall in demand that the market fears in the world’s largest commodity market is therefore unlikely to happen.

Furthermore, supply should fall in the coming months for many commodities as numerous production sites are no longer operating profitably at current prices. Prime examples are nickel or platinum, where total production costs should be 30-40% higher than current prices at times. And US crude oil production is also showing first signs of slowing in the meantime; in mid-July it has retreated at its sharpest rate in years, apart from temporary dips in previous years for weather reasons.

Consequently, for most commodities we still expect prices to be higher at the end of the year than they are at present. That said, with the latest price slide, the risk that our present year-end forecast (e.g. Brent: 65 US$ a barrel) will not be reached has increased. 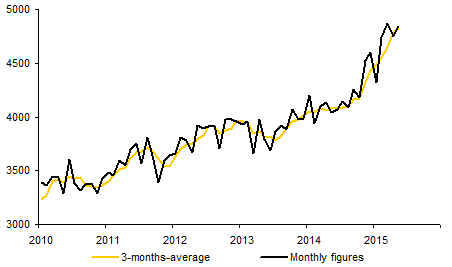