Macroeconomic performance across the Asian region continues to evolve, upending some long-held preconceptions in the process. The most dramatic shift has been the introduction of India’s revised national accounts, which leave it usurping China’s crown as the region’s fastest-growing economy. The revised data put Indian GDP growth at 7.5% (y-o-y) in Q4 2014, above China’s 7.3% (y-o-y) growth in Q4 2014, which then slowed further to 7.0% in Q1 2015.

Doubts and confusion swirl around both countries’ ‘official’ GDP data, however. India’s revised GDP data, which has added around 2% to previously estimated GDP growth, has been greeted by a wave of scepticism. The revisions and the picture of healthy and accelerating GDP growth are necessarily at odds with other key indicators, such as depressed credit growth, flat to falling import volumes and industrial production, and sluggish auto sales. Critically, India’s external deficits were narrowing rapidly at the time when the economy was supposedly accelerating. The Reserve Bank of India’s Monetary Policy Report, published in April, expresses the concerns succinctly: “these data cloud an accurate assessment of the state of the business cycle and the appropriate monetary policy stance; particularly, they render forecasting tenuous”.

The veracity of China’s ‘official’ GDP data have also long been impugned, most famously by Chinese Premier Li Keqiang himself, who reportedly described the data as ‘man made’. Worryingly, the gap between ‘official’ real estimates and other more reliable indicators for growth appears to have widened in recent quarters. Real GDP growth of 7% is hard to square with quarter-on-quarter contractions in nominal GDP and industrial production in Q1, negative y-o-y growth in rail cargo and import volumes, and near stagnation in electricity production. As we previously noted, there is strong circumstantial evidence that the GDP deflator is being squeezed to generate more ‘real’ growth from a given nominal growth baseline. Adjusting for this, we peg ‘real’ real GDP growth in China at around 3.5% (y-o-y) in Q1 – a rate much more in line with the other indicators detailed above. 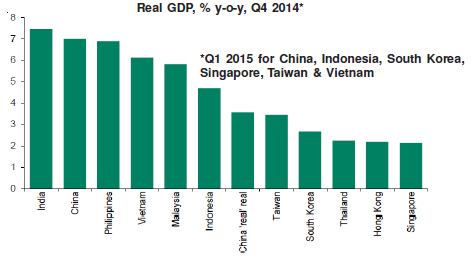 On our ‘real’ real basis, China’s GDP growth is firmly in the middle of the regional pack (Chart 1) and has suffered the largest deterioration in the region relative to its 10-year average (Chart 2). Other standouts from the regional growth ranking are the ailing performance of the two city states – Hong Kong and Singapore – and, more importantly, the fading performance of Indonesia, South Korea and Thailand. Of these three, it is hard to know which is the more disappointing. Critically, a key driver of the disappointment in all three appears to be slowing potential growth, which in turn reflects years of policy inaction, even arrogance, over what is required to produce faster growth rates. Following political disruption last year which pushed GDP growth below 1%, Thailand should be snapping back vigorously, but it seems to be struggling to grow faster than our 3-3.5% trend estimate.

The gulf between rhetoric and reality is perhaps widest in Indonesia. President Jokowi has touted a 7% GDP growth objective by 2018 even as growth has slipped below 5% for the first time since Q3 2009. It is now increasingly obvious that the improvements in Indonesia’s macro performance between 2010 and 2013 were cyclical and externally driven, rather than structural and domestically driven as the bulls insisted. Trend GDP growth is probably not much more than 5.5% and, considering the outlook for continued slowdown in China and further downward pressure on Indonesia’s commodity exports, regaining 5% looks like a struggle in the near term.

Chart 2: Mostly on the Slide 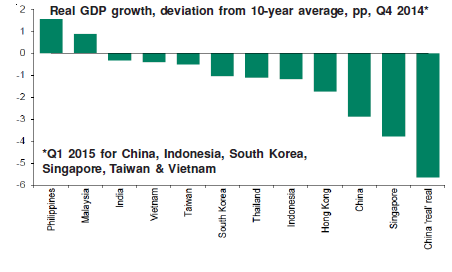 A bright spot is the Philippines, whose around 7% GDP growth leaves it officially in regional bronze-medal position; in view of doubts over the veracity of the Indian and Chinese GDP data, it may actually be the region’s fastest grower. Encouragingly, the Philippines’ trend growth may be as high as 7% and has improved by at least 1pp over the last decade, thanks to strong productivity growth. This is in stark contrast to much of the rest of the region, particularly South Korea, Thailand, Singapore and Indonesia. If capital spending picks up, Philippine trend growth could pick up to as high as 8%, leaving it more clearly in regional pole position.

Inflation developments present a similarly mixed picture, with the strong disinflationary downdraft of lower oil and also food prices damping headline rates, while the presence of spare capacity in many economies restrains underlying inflation (Chart 3). Notably, headline inflation is below its 10-year average in every economy. Thailand, Taiwan and Singapore (just) have all slipped into headline deflation in recent months. Only hefty tax increases on tobacco, which have added 0.6pp to y-o-y inflation, are keeping South Korea out of headline deflation for the first time since the Asia crisis. Sluggish growth and the threat of low-flation becoming embedded in inflation expectations keep the prospect of further monetary easing on the table in both Thailand and South Korea. 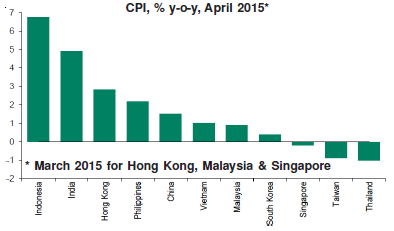 Just as there have been potentially portentous changes at the top of the regional growth league, the baton at the top of the inflation league has also changed hands at least temporarily, with Indonesia overtaking India. Inevitably, food inflation is a key driver, with Indonesia’s protectionist impulses unhelpfully fuelling food inflation. Back-to-back deficient monsoons risk Indian inflation moving back above 7% (y-o-y) by early 2016 and so regaining the inflationary ‘crown’; for now, the combination of sub-5% GDP growth and 6%-plus inflation leaves Indonesia’s macro performance the most disappointing in the region. 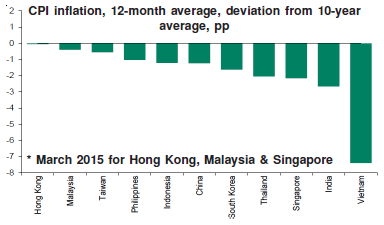