• The ‘Occupy Central’ protests have not ended. The retail sector and food/beverage services, which represent 4.1% and 2.2% of the GDP, are hard hit.

• The slowdown of China’s growth momentum and changing spending patterns of Mainland tourists will weigh on imports/exports and tourism.

• Political deadlock in Legislative Council will continue to obstruct the fiscal spending proposal put forward by the government.

The fact is that retail sales are a good gauge of the overall health of the city’s economy, even though its direct contribution to GDP in terms of value added appears small (4.1%). Compared with other newly industrialised Asian economies, Hong Kong has clearly put its bet on retail sales. Although we’ve see one-off retail sales spike due to the iPhone launch and an earlier moon cake festival in September, the contraction of retail sales growth from February to July was already worrisome. The outbreak of Occupy Central in the last week of September has obviously rubbed salt into the wound.

On average, Q4 GDP represents about 27%, a larger proportion, of the annual total GDP. Any setback in economic activity in Q4 will weigh on Hong Kong’s full-year growth. Earlier, we estimated that the impact of ‘Occupy Central’ on retail sales could be as much as 6% of average retail sales in October. As the protests have dragged on, the impact will obviously be greater. Besides retail sales, other segments like food and beverage services (e.g. restaurants), land transports (e.g. taxi), real estate services (e.g. property agents), which together represent 14.2% of Hong Kong’s GDP, have also been interrupted by the protests. It’s estimated that a 10% decline in activity in these sectors would shave 0.4 pct off Hong Kong’s GDP in Q4.

Even without the protests, Q4 growth would likely slow on the sluggish momentum of China. Unless global growth can pick up significantly, it is highly likely that Hong Kong’s economy will underperform in Q4. We have now cut 2014 GDP growth to 1.9% from 2.5% previously. For 2015, our forecast of 3.9% growth will be subject to downside risks should the global recovery fail to get back on track. 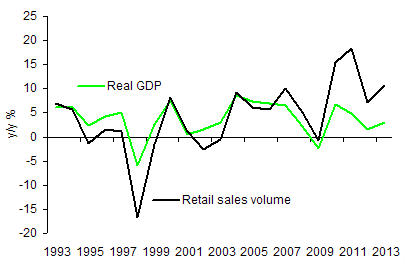 HK$ Peg: The Best Option Amid Rising Political Uncertainty
Even though Hong Kong’s growth will likely slip in Q4, its monetary and financial system remains intact. Here we stress that the Linked Exchange Rate System (LERS) continues to perform normally. So far the protests pose no risk to the city’s banking and exchange rate regime. Amid heightening political tension, recently some high-profile figures have suggested that the HK$ can be linked to the RMB or a basket of currencies.2 In our view, Hong Kong’s current exchange rate regime isn’t ready for a change:

Firstly, while the RMB is widely used in trade and will also be a popular reserve currency in a few years, it is still far from being an exchange rate target that the HK$ should be pegged to. Exchange rate regime is a monetary policy choice for the benefit of macroeconomic management. Undoubtedly, the RMB has been dominantly used in Hong Kong’s trade in recent years but mainly related to cross-border trade. In addition, central banks may allocate part of their reserves to be held in RMB. However, in our view, a central bank’s credibility rests on stability and transparency. Obviously, the monetary policy of Hong Kong, a small-open economy, would prefer to follow the U.S., whose monetary policy appears to be better established (e.g., FOMC meeting procedure), compared with that of the PBoC (eg, RMB daily fixing). 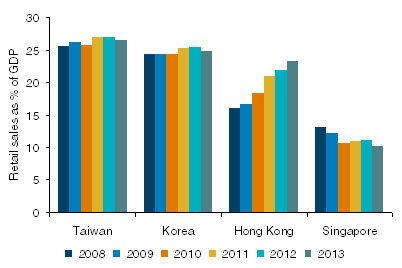 Secondly, it seems that Hong Kong’s currency board is the most disciplined and adopts a least interventionist approach. Its non-partisan nature is especially crucial at a time of rising political uncertainty in Hong Kong. In contrast to common perceptions about the fixed exchange rate system, the LERS imposes maximum restraint as to what the monetary authority can do. Hong Kong interest rates largely track global benchmark or LIBOR while the HK$ exchange rate is tied to the US$, the global base currency. As the U.S. Fed does not target or comment on the US$ by convention, the Hong Kong exchange rate regime is the least interventionist.

Thirdly, linking the HK$ to a basket of currencies involves a one-time revaluation of the current rate and will hurt the Hong Kong Monetary Authority (HKMA)’s credibility. In addition, choosing the basket is still based on judgment, no matter how mechanical and transparent the process is. Similar to Singapore’s S$EER system, it will nonetheless create market uncertainty.

Some people may propose to link the HK$ to the RMB based on patriotic considerations, as Hong Kong is part of China. However, the LERS is protected under the Basic Law and is highly honoured by the central government. We think that it serves China’s interest to maintain a market based HK$ system so that Hong Kong can be used to pilot different financial market reforms, including CNH and Stock Connect etc.

The Protests May Dampen Long-Term Competitiveness
Realistically, the impact of ‘Occupy Central’ on Hong Kong is not as significant as previous crises like the Asian financial crisis, the SARS epidemic or even the 2008 global financial crisis, which led to several quarterly GDP contractions. However, the long-term impact of the protests on the city’s economy should not be undermined.

Chart 3: Rising Use of Renminbi in Hong Kong’s Trade 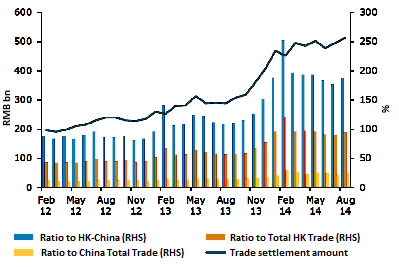 A stable political environment, upholding the rule of law and related soft infrastructure were the cornerstones for Hong Kong to prosper in the last few centuries. Foreign and local investors favour Hong Kong’s stability when setting up their Asian business operations, even after the handover of the territory from British rule to the sovereign rule of the People’s Republic of China. The ongoing protests and illegal blockage of roads during ‘Occupy Central’ have begun to challenge Hong Kong’s rule of law. Deterioration in political and governance conditions will eventually dampen the confidence of investors.

We repeatedly highlighted the risk of political impasse for Hong Kong’s macroeconomic management because of ongoing filibusters in the Legislative Council. More than HK$100bn infrastructure projects (5% of GDP) are supposed to boost the economy over the next few years, including Hong Kong-Zhuhai-Macau Bridge, Central-Wan Chai Bypass Project, Guangzhou-Shenzhen-Hong Kong Express Rail Link and Liantang Boundary Control Point. In the future, these macroeconomic or counter-cyclical measures may also be delayed or cannot be approved with the rise of an ‘uncooperative movement’. Hong Kong long-term economic competitiveness would be at risk. 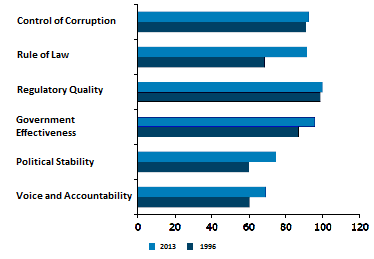