The global economy has disappointed again in 2015, growing less than expected. In contrast to previous years, emerging economies have been the main culprit, while Europe has performed in line with earlier expectations. The US and Japan have fallen modestly short of earlier expectations. Inflation was, generally, not a problem, while fears for deflation did not dominate either.

The outlook for 2016 and beyond hinges on the answer to two questions. First, can emerging economies deal with the challenges they have been struggling with in 2015? And second, can advanced economies maintain their growth momentum?

Our answer is a cautious ‘yes’ to both questions. It must be said, though, that the risks of a less favourable development in emerging economies than we are forecasting in our base case are relatively high. To be clear, most other economists and commentators take a more negative view on the outlook for emerging economies. So our cautiously optimistic view is more positive than the view of many others.

Challenges for Emerging Economies
It does not do justice to the realities of emerging countries to see them as a homogenous group. Yet, they tend to have a number of challenges in common that have plagued them in 2015. Three in particular stand out:

The Slowdown in China
Chinese economic growth has been slowing for several years. This will continue as the Chinese economy becomes larger and richer and it is also the result of the changed growth strategy with more emphasis on consumption growth and services, rather than on construction, investment and exports. While many question the accuracy of Chinese economic data, we think that the Chinese economy has, so far, gone through a soft landing and we expect that process to continue. However, the effects on the rest of the world economy are largely felt through what is happening to Chinese imports. And these imports have, as far as we can read the data, been particularly weak in 2015, falling by some 5% or so in 2015 in volume terms, much weaker than one would associate with a soft landing of the overall economy. It is probably fair to say that while China has experienced a soft landing, it has actually felt quite hard for the rest of the world. Why this has happened is not entirely clear, particularly in a year when the Chinese currency has appreciated against many other currencies, weakening Chinese competitiveness. It could be the result of the shift towards services as an engine of growth, but that alone seems an implausible and insufficient explanation for such import weakness. It would appear unlikely that imports in China’s economy can continue to contract in volume terms while the economy continues to grow at a decent, albeit somewhat slower pace. Looking into 2016, therefore, it is hard to see how the impact of China on the rest of the world economy can get more negative, unless it experiences a real hard landing. Instead, we actually expect China’s impact on the rest of the world to be less negative in 2016 and 2017 than it has been in 2015. 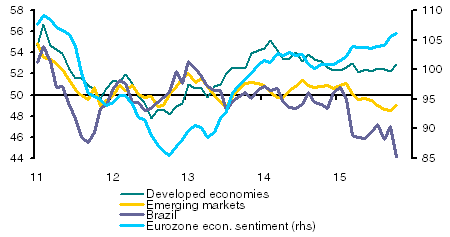 The Fall in Commodity Prices
Commodity prices have been sliding down since 2011, but the fall in prices accelerated sharply in the second half of 2014, extending and intensifying in 2015. Over the last 18 months oil prices have fallen some 60%. Other commodity prices have fallen less, but still by a significant amount. As commodity producers and exporters are mainly found in the group of emerging economies, the fall in commodity prices has been very negative for these economies, while it has, with a couple of notable exceptions such as Australia and Canada, been positive for advanced economies. The typical response to such big shocks is that the winners take a while to realise their windfall and adjust spending patterns. In contrast, the losers are usually quick to respond. Investment spending in the commodity sectors is slashed rapidly and governments seeing their revenues fall are forced to implement austerity.

Many commodity markets continue to be plagued by excess supply. The drop in Chinese imports, the disappointing development of the world economy as a whole and the increased productive capacity in recent years have created an imbalance between supply and demand that will take time to disappear. It would be too simplistic, however, to assume downward pressure on commodity prices will persist as long as excess supply exists. Speculative investors are important players in these markets. Net short positions by speculative players have reached record levels in the oil market. While these net short positions could yet increase, it would appear much more likely that they will be closed on a one year horizon, pushing oil prices higher, not lower. Meanwhile, high-cost oil producers are starting to cut back production. This would encourage holders of short positions to close their positions even if oil production continues to exceed global consumption. Similar arguments can be made concerning other commodities, in particular metals. We therefore believe that the commodity markets are going to be less unfriendly to emerging economies in 2016 than in 2015, while the beneficiaries of the weakness of oil and other commodity prices have not yet used up their full advantage.

A country experiencing a collapse in its export prices must adjust to these changed circumstances. Allowing, or encouraging, a depreciation of the currency would be an obvious strategy and in fact, inevitable. In the short term, a drop in one’s currency exacerbates the economic difficulties as it increases inflation and encourages capital outflows. But in the next phase these effects weaken and the improvement in competitiveness starts to dominate. The result is an improvement in foreign trade. Most emerging economies have seen their currencies weaken significantly against the US dollar during the last 18 months or so. The positive effects are now starting to come through, for example in a clear improvement in the trade balance of countries such as Brazil and Turkey. We would expect this positive effect gradually to get stronger in the course of 2016. 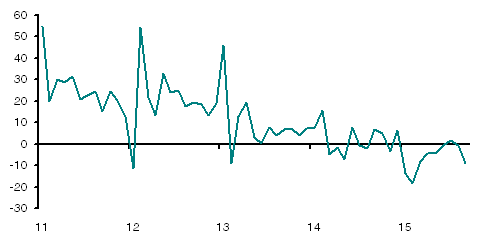 It is tempting to argue that this situation will get worse before it gets better and it probably will. But some qualifications are in order here. First, many emerging countries depend more on Foreign Direct Investment (FDI) flows than on portfolio flows. Brazil is a good example. These FDI flows are much more stable than portfolio flows. Second, many emerging economies have significant foreign exchange reserves which can act as a shock absorber. Indeed, many of these economies have drawn down reserves in the last two years. Third, one must also raise the question why foreign capital would continue to leave these economies throughout 2016 and perhaps in 2017. The currencies of these countries have fallen a lot, how much more is there to go? Investors who have suffered significant currency losses may prefer to sweat it out from here. In addition, if our expectations for commodity prices turn out to be correct, economic conditions for commodity exporters should start to stabilise in the course of 2016, further encouraging foreign capital to stay. Clearly this is an assessment on a knife’s edge. Capital flows can be volatile and volatility can be triggered by the smallest incident or policy or communication mistake. Monetary tightening in the US would perhaps be the most obvious risk here.

Advanced Economies Doing Well
The eurozone economy has grown roughly in line with what was expected at the beginning of 2015. That is positive as the rest of the world has disappointed and tension around Greece increased sharply over the summer. The overall growth rate of the eurozone economy of around 1.5% in 2015 on average is low by historic standards, but falling unemployment suggests that trend growth is even lower. The positive outcome in 2015 suggests that the tailwinds of lower oil prices, low interest rates, the healing of the credit channel, the weaker euro and the end to austerity are doing their job. While some of these effects will weaken in the course of 2016, others will remain. In addition, the recovery has, arguably, become self-sustaining as domestic demand is finally recovering and overall growth is now broadly based. In addition, the ECB is set to increase its stimulus as it wants to prevent the risk that financial market volatility and disappointments in the rest of the world economy hurt the eurozone recovery. The ECB is also keenly aware that it continues to undershoot its inflation target and is seeking ways to bring inflation closer to its target. 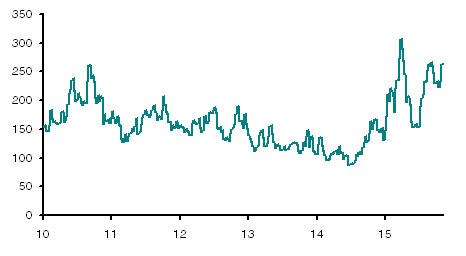 The US economy has entered its seventh year of recovery following the 07/09 recession. But the recovery has been unusually tepid. This is most likely the result of a fall in trend growth, but also in the weakness elsewhere and the deleveraging process that was needed after the crisis. Some argue that recoveries do not, on average, last much longer than seven years, so a recession must be in sight. We disagree. The fact that the recovery has been so slow implies that bottlenecks, such as high inflation, falling corporate profits, shortages in certain sectors etc., that usually are a reason for an economic upturn to end are not anywhere close. 2015 has seen decent economic growth in the US, albeit a little slower than anticipated. Such an observation conceals the fact that domestic demand growth has accelerated materially and foreign trade plus inventories have become a significant drag on US economic growth in 2015. We see little reason to assume that US economic performance will deteriorate in 2016. We think that growth will remain roughly unchanged in 2016.

As unemployment has fallen to what must be close to the level consistent with full employment, and official interest rates are still at crisis lows, the Fed has every reason to tighten monetary policy. But given the lack of immediate inflationary pressures, given the strong dollar and the potential volatility higher US rates may cause in financial markets after such an extended period of effectively zero interest rates, the Fed also has every reason to act cautiously. We therefore expect the slowest tightening process of the Federal Reserve’s history.

Japan has, strictly speaking, fallen back into recession as GDP contracted in the second and the third quarters of 2015. This is, no doubt, a disappointment. However, one must bear in mind that potential growth in Japan is very low. The OECD, for example, estimates it at 0.4%. A modest undershoot of potential growth thus quickly pushes the economy into a technical recession. We must consider whether this definition of recession is useful for an economy such as Japan. Nevertheless, we expect the Bank of Japan to increase its stimulus in due course.

Overall Encouraging, Risks Are Obvious
Our central message is that the global economy should grow a little faster in 2016 and 2017 than in 2015. Key to that view is that emerging economies will be able to cope a little better with the challenges presented to them in the course of 2015. The Chinese slowdown will continue, but its negative effects on the rest of the world economy will ease. Commodity markets appear to have undershot and some stabilisation of prices and perhaps even a modest recovery in prices is our main scenario for 2016. Finally, financial conditions in emerging economies have tightened, but as currencies have already corrected sharply, and commodity prices are expected to at least stabilise, the worst may be over.

Our expectations in all these three areas are subject to risk. The Chinese slowdown may intensify and the contraction of imports may continue. In addition, sustained excess supply in commodity markets may push commodity prices lower still at least for a while And debt problems in emerging economies, together with a rise in US interest rates and the US dollar may lead to further tightening of financial conditions in emerging economies. How high these risks are, is obviously difficult to gauge, but we would estimate the chance of our base case scenario materialising at 65-70% and the risk scenario at 30-35%.

We are (even) more confident about the outlook for the eurozone and the US. The recoveries in these economies are now broad based and they continue to benefit from tailwinds.