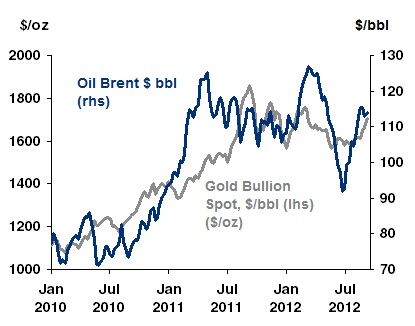 US Republican policy drafts suggest the establishment of a “Gold Commission”, and the possible return to a gold standard and abandonment of Bernanke’s Quantitative Easing (QE) policies. We review the implications of a gold standard, and what it would likely mean for financial markets.

Ever since US Governor Rick Perry suggested that Ben Bernanke’s QE policies were “Treasonous”, intimating that the policy was an unpatriotic currency debasement, the Republican campaign has been in search of an alternative to the Fed’s current monetary strategy. As well as probably replacing Ben Bernanke as Chairman of the Fed, and possibly an audit and complete reformulation of the Federal Reserve, this party has recently toyed with the re-introduction of some form of gold standard, an anchor for the US dollar (USD), and for monetary policy.

In what follows, we consider the pros and cons of a return to some form of gold standard in terms of how it addresses the economic problems suffered in the US today. However, we have to say from the outset, that we can find few arguments that would support such a policy shift.

The starting point for this discussion is to set out what such a gold standard might entail, and of course, until and unless this “Gold Commission” is set up and deliberates, we have almost nothing to go on here, so we will limit this first part to a few generalisations.

Figure 1: US GDP Growth and Inflation During and Outside Gold Standards 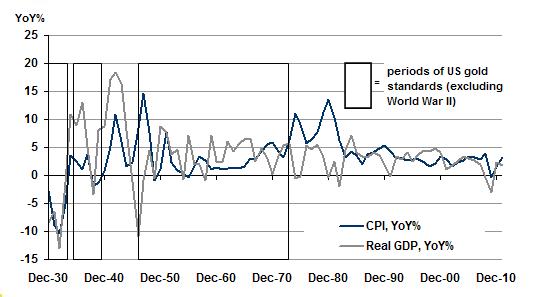 In its pure form, a specie gold standard circulates the currency in the form of coins with a fixed gold content (sometimes a gold and silver specie). But we have moved on a bit since those lute-playing times. An American-Eagle based US economy is probably more of a post-nuclear apocalyptic alternative than a serious contender to today’s Fed.

A gold bullion standard seems a more likely candidate, where US dollar notes are freely exchangeable for gold bullion at a fixed price. This could be combined with a gold exchange standard, in which other countries fix their currencies to a gold backed US dollar, to produce something that would look very like the Bretton-Woods system that took over from existing Gold standards after the Second World War up until 1971.

Simply put, backing the currency with gold provides a limit to the monetary expansion possible by the Central Bank. With a 100% gold reserve standard, the money supply is fully backed (a bit like a currency board) and convertible into gold bullion. An economy under this regime could only expand its money supply to the extent that it accumulated gold through running current account surpluses, or through an increase in the rate at which it mined gold. Such increases would likely be very limited indeed unless the currency was substantially undervalued.

In contrast, today’s financial world allows Central Banks to influence in both directions the money multiplier of a fractional banking system by altering money market rates, and in extremis, can create (and destroy) money electronically, giving far greater flexibility to monetary policy to offset growth or contractions.

Flexibility sounds like a good thing to have, and indeed, this is how it sounds to the vast majority of economists. That said, Austrian school advocates will argue that a less than fully backed gold reserve standard, say with only partial backing, would allow for a much more flexible approach of the Central Bank to monetary policy, whilst also providing benefits in terms of enhanced anti-inflation properties.

The Federal Reserve Act of 1913 set out just such a partial reserve system, in which the Federal Reserve Banks would have to maintain reserves in gold “of lawful money” of not less than 35% of its deposits, and not less than 40% against its Federal Reserve notes. In practice, this gave the Federal Reserve the power to use discount rate policy to choke off or unleash credit growth according to the state of the domestic economy. However, such a partially backed currency regime would preclude the sort of long-running stimulus that the Fed has been running since the global financial crisis. In times of crisis such as this, gold reserves would quickly become depleted, undermining confidence in the currency and eventually breaking the link with gold, as it did multiple times during the somewhat chequered history of gold standards.

Indeed, the litany of crisis and economic disaster, both during, and frequently because of previous instances of gold standards, is so long and chequered, that it seems remarkable that anyone with any inkling of economic history would go down this path:

Britain, which prior to the First World War, had enjoyed global reserve currency status, attempted to rejoin the gold standard at its pre-war parity of $4.8665 in April 1925, following a bout of deflation that had brought its price level down by 50% since 1920. The high interest rates that the Bank of England had to maintain to achieve this parity condemned Britain to further years of economic stagnation, which was brought to a sticky end in 1931 after market panic in Austria and Germany following the collapse of Kreditanstalt leading to the liquidation of sterling deposits in exchange for gold.

With Britain’s abandonment of the gold standard, the US dollar became the default gold standard reserve currency, whilst Central Banks in Europe had opted to adopt a gold bullion standard rather than a gold exchange standard to limit gold outflows. These banks continued to run down foreign exchange, and the steady outflow of gold from the US was only partially sterilised by the Federal Reserve through stimulatory open market operations. The Great Depression in 1929 led to a flight of funds from the US, and by 1933, thanks in part to the tight policy implemented to defend the gold standard, stock prices were down 80% from the 1929 peak, and output, wholesale prices and the money supply were all down by about two thirds of their 1929 level. In March 1933, the gold standard was abandoned once more.

Following the Second World War, the Bretton Woods system re-established a gold exchange standard with the US dollar fixed to gold, and other countries pegging their currencies to the US dollar. But failure of the US to “play by the rules”, mainly because of the heavy fiscal costs of the Vietnam War, and a resumption of steady gold outflows, led to the abandonment of this system in August 1971. Interestingly, it was the death throws of this system that gave rise to the first episode of the “Twist” policy. This policy was originally designed to prevent gold outflows by selling short-dated paper to raise short-dated interest rates, by buying long maturity bonds to provide some stimulus through lower long term rates. It didn’t work then either.

Aside from its disappointing history, critics of a gold standard suggest that the current stock of gold is insufficient to back a currency like the US. A snapshot of the current situation suggests they are right. The US Fed holds about 8,150 tonnes of gold, approximately 23% of total world gold reserves, which themselves amount to about 18% of the total world stock of gold (the rest is held in jewellery etc). At the current value of $1771 per troy ounce, and with 32,150.754 troy ounces in a tonne, this equates to a value of $460bn or thereabouts. This contrasts with the stock of currency in circulation plus demand deposits of $1.6tr. Of course, this might provide a starting point for a partial reserve standard (of about 25%), though we would imagine that the US might want to substantially increase its gold backing to the 30-40% level as in the past if it were to go down this route.

Of course, this would add a new source of demand for gold bullion, together with increased demand by other global Central Banks wishing to bolster reserves. There could really only be one effect on the price of gold – to substantially raise it. 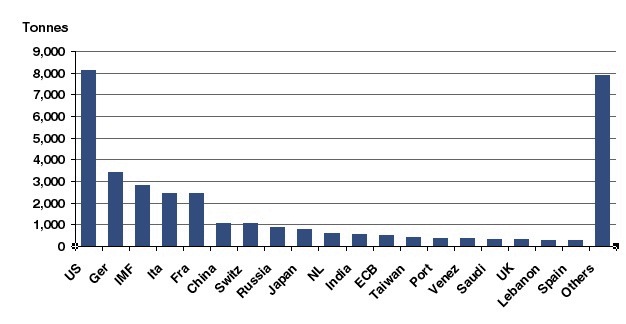 A second consideration is the growth in the stock of gold. This growth rate would provide a medium term cap on growth in the money supply and on nominal GDP growth. World gold output has been fairly steady at about 2,500 tonnes in recent years. Compared to the total world stock of gold, this is about a 1.5-2.0% growth rate. We imagine that in the face of much higher prices, it might be possible to boost this production. But production has been fairly stable against a very substantial rise in gold prices in recent years, and we would not want to overdo this optimism. Even allowing for a 3% growth rate in output, this would limit nominal GDP growth to a similar range. So unless you allow for large and persistent negative inflation (deflation) real growth rates will probably struggle to exceed 2.0% per annum.

And this takes us to the other aspect of this discussion. What is it that we need to mend in the US (global) economy? And does a gold standard deliver the goods? Our subjective list of what ails the US economy is as follows:

But a gold standard, whilst it may do a variety of things, including stabilising exchange rates (though not guaranteeing a fair rate), and preventing hyperinflation (until it is abandoned) also has historically tended to deliver substantial real and nominal GDP volatility, depressions, and deflation. If anything, this sounds more like what ailed the US economy in the depths of the global financial downturn, not something we should be rushing to embrace once more. A Gold standard would provide many of the handicaps of the single currency in Europe, an abdication of monetary and exchange rate autonomy, and a tendency to drift into depression and deflation. The benefits of inflation and currency stability are debatable, and achievable by other means.

Figure 3: US Economy – During and Outside of Gold Standards

In figure 1, we show inflation and GDP during periods of gold standard (including Bretton Woods) and compare it with the subsequent period. And although the starting period does encompass the great depression, which some might argue is unfair, critics of gold standards would point out that the length and depth of the great depression was largely attributable to the perverse policy incentives that the gold standard had on policy makers – for example, encouraging tighter monetary policy to offset accelerating outflows of gold. In any case, despite lower and more stable inflation, growth was slower, and more volatile. Inflation also tended to converge on zero, whilst many economists (including this author) tend to agree that a little (1-3%) of inflation is a “good thing”.

The criticism of those who see QE as debasing the currency do have some merit, and is one of the reasons why gold demand and the price of gold has been so high following the introduction of QE policies around the developed world. But the current EUR/USD exchange rate of around 1.30 is about where most analysts would put their central estimate for the range encompassing fair value. Moreover, as we have pointed out in recent notes, the likelihood of QE resulting in any weakness of the USD against the other major currencies, whilst the Eurozone, Japan and UK are all also engaged in forms of QE, is slim. Indeed, more reasonably, weaker major currencies versus the rest of the world might reasonable be argued as part of the adjustment process to the excesses of the late 1990s and 2000s, coming through currency movements now, not just the real and financial economies. Without this, the manufacturing sectors of these countries, some of which continue to show glimmers of life, might well be all but extinguished.

To wrap up, gold standards may have a long tradition in Europe and the US. But then we also used to send children up chimneys and burn witches. There is little to argue for a return to such practices today.