Trump’s Win Brings Uncertainty to Asia
Although the initial risk-off moves in financial markets in response to Donald Trump’s victory in the US presidential election have reversed, there is still enormous uncertainty ahead. Simply, perceptions of heightened US economic nationalism are ubiquitous. This is understandable given Mr Trump’s constant campaign promises to renegotiate NAFTA, address the trade deficit with China (by possibly raising tariffs by 45%), his condemnation of TPP, and criticism of the US Federal Reserve.

The uncertainty also reflects anxiety about Mr Trump’s inexperience in public office, his foreign policies – especially given current tensions in the Middle East, a promise to build a wall along the border with Mexico, tighter immigration (deporting 11 million illegal immigrants), and a promise to materially boost military spending. It also reflects concerns about a divided America and the question of whether Mr Trump will be able to heal divisions following a divisive campaign.

Trade policy will remain a large area of uncertainty for economies and markets and it rests at the heart of Mr Trump’s job creation plans. Under US law, the President has discretion to renegotiate trade deals. Trade policy, therefore, will remain at the forefront of market uncertainty and that could well be a headwind to any near term recovery in global trade growth, weighing on sentiment towards emerging markets.

Markets are now waiting to see what Mr Trump will clarify as policy and whether his emotive election rhetoric will be toned down. It will also be very important to monitor who he appoints to key offices in Washington. What we do know is that Mr Trump will endeavour to repeal Obamacare and Dodd-Frank.

What Now for Asia?
With Donald Trump to be inaugurated as the 45th President of the United States of America on 20 January 2017, we look at the implications for Asian currencies and bond markets.

FX: Judging from the extent of Asian currency sell-offs during episodes of major market turmoil in recent years, we see risk of further depreciation. In the near term, we think that US$/Asia could go up by another 1.6% to re-test the high seen in January this year. This will take the cumulative loss over the past month (when the market started to focus on the US presidential election) to around 4%, which is within the 3-5% range of declines seen in Asian currencies during events such as the Eurozone sovereign debt crisis in 2011-12 and the US Fed’s December 2015 rate hike, but still short of the 8% sell-off during the taper tantrums in H2 2013.

However, more importantly, unlike those previous episodes when Asian currencies rebounded swiftly after a short period of sell-off, the fall in Asian currencies this time round will most likely extend through 2017. 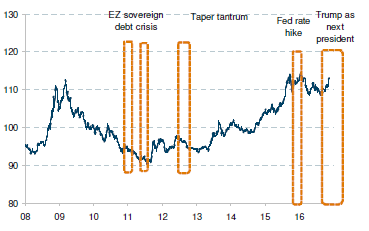 Our bearish view on Asian currencies stems primarily from Mr Trump’s economic policies promised during his campaign. His protectionist stance on global trade is negative for Asian growth given the region’s high dependency on trade. Under a Trump presidency, the Trans-Pacific Partnership will be under serious threat. While another option is the Regional Comprehensive Economic Partnership, this will unlikely materialise in the near future.

For now, Asia has to contend with the risk of trade protectionism. We see the likelihood of a major reversal in equity flows after the strong inflows of US$39bn in the first nine months of the year, spurred by the easy monetary policies of global central banks. Further monetary accommodation is now in doubt and in the case of the US, we could see a faster pace of policy normalisation under a Trump administration.

Among Asian economies, we see a larger impact on high trade dependent countries like Singapore, Malaysia, Thailand, Taiwan and South Korea. Notably, KRW and MYR are risk-sensitive currencies which are more vulnerable during periods of financial market volatility.

At the other end of the spectrum are domestically driven economies like India and Indonesia, which should be less impacted by any setback in global trade. Relatively speaking, China is also among the less trade dependent economies in Asia. Importantly, China’s trade dependence on the US has declined in the last decade. Currently, the trade balance contributes only 2.3 percentage points to GDP growth. If the US imposes tariffs on China’s exports and its trade surplus declines by, say, 25%, it would shave only 0.6 percentage points off China’s GDP growth.1

That said, we expect the RMB, together with the SG$, to lose further ground in trade-weighted terms. For the RMB, we continue to see a risk that the RMB (CFETS) index resumes its downtrend after a three-month consolidation. Clearly, with Mr Trump as the next US president, we need to see if he will indeed label China as a currency manipulator, even though China currently only meets one out of three conditions of the US Treasury for currency manipulation.2

In the meantime, we see further downside in the SG$ trade-weighted index. The S$NEER is now trading at 1.1% below the mid-point, the weakest since the MAS policy review in October. We see a possibility of the S$NEER testing the lower bound of the +/-2% policy band in the coming months. 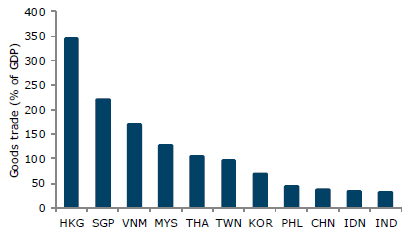 Bonds: We see upside risk in US interest rates, which bodes ill for Asian bonds. While we await Mr Trump to make his post-election policy statements to provide further clarification on his fiscal proposals, Figure 4 (below) shows fiscal estimates published in September by the Committee for a Responsible Federal Budget.

Mr Trump’s election proposals, which is pro-US growth supported by fiscal spending, will ultimately underpin the US economy, further boosting employment and wage growth at a time when the labour market is close to full employment. This will push US inflation higher, meeting the US Federal Reserve’s dual mandate sooner than expected.

With this, we expect Asian bonds to come under pressure, extending the recent sell-off in bonds. The potential for Asian currency depreciation, coupled with higher US Treasury yields and higher US$ funding cost, will likely put a serious test on Asia’s carry trades, especially given the strong performance of Asian bonds and the heavy foreign buying to-date this year.

Figure 3: China’s Trade Surplus with the US 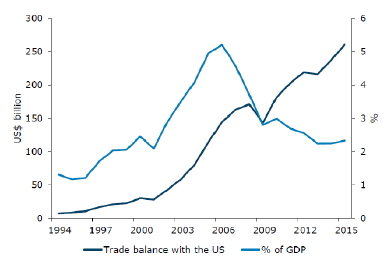 In such an environment, safe haven markets like SG$ and THB may be slightly more resilient, though all will be impacted. We also think that China will be less vulnerable, on flight-to-safety demand if indeed the Trump administration adopts tougher policies on trade, thus impacting China’s growth.

We may see fluctuation in liquidity conditions if fund outflows increase on stronger expectations of RMB depreciation, but we expect the PBoC to offset the outflows. Also, much of the recent foreign buying of China bonds is sovereign driven (hence longer term), on the back of the inclusion of the RMB in the SDR basket.

Among the high yielders, positioning in Indian bonds is not as crowded compared to others. Year-to-date, bond flows into India are broadly flat. We also expect the RBI to cut rates further, most likely in Q1 2017. On the reform front, the country continues to make progress, the most recent being the scraping of 500 and 1000 rupee notes. This is aimed at combating graft and tax evasion, and to re-direct financial resources from the parallel economy to the mainstream economy, which will benefit the banking system and potentially the stock and bond markets. 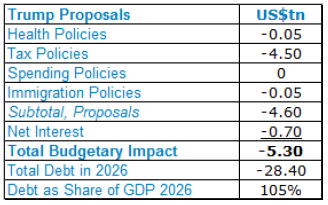 Notes:
1 See China Insight: Is The US Election Relevant to China?
https://anzlive.secure.force.com/servlet/servlet.FileDownload?file=00P1400000u3VHkEAM
2 See Asia FX: Who is a Manipulator?
https://anzlive.secure.force.com/servlet/servlet.FileDownload?file=00P1400000sLMZKEA4