European peripherals have managed to stay out of the headlines at the beginning of 2013, and Portugal is no exception. The International Monetary Fund (IMF) approved the disbursement of the next loan tranche to Portugal of €838.8mn. Among the encouraging signs, the relentless efforts towards fiscal consolidation, which we have highlighted on various occasions, and following the latest drop in 10-year Portuguese government bonds (OT), it is time to take the pulse of Portugal in terms of how much growth momentum there is left, its impact on the fiscal situation and, not least, its implications for financial markets ahead of a potential government bond auction later in the second half of 2013.

To cut a long story short, despite the positive signals from the bond market, the situation remains challenging on all fronts for Portugal. Specifically, the fiscal target remains a daunting task for 2013 and beyond, despite the 2012 softening by the European Commission – the latest target is for a 4.5% deficit to GDP in 2013, to be followed by prints below 3.0% in 2014.

Good Start to 2013 For Portugal

Unsurprisingly, the IMF has approved the next tranche of disbursement for Portugal, totalling €838.8mn, earlier this week, and made positive references to its continued fiscal efforts. At a time of slow growth, not least in the eurozone, and fully aware of the increased political cross-fire domestically, the IMF views the Portuguese programme as broadly on track.

NO Positive Growth Contributor Left in The Economy

Nothing highlights the difficulties of the Portuguese economy at the outset of 2013 better than a quick glance at GDP growth (-3.5% y-o-y and -0.9% q-o-q in Q3 2012) and, in particular, the contributions to overall growth on the expenditure side as of Q3 2012. The small positive growth momentum in the form of exports in early 2012 had virtually disappeared later in the year. All other subcomponents have been adding negatively to Portuguese GDP for some time already. It thus comes down to lower imports (see Chart 1) to support GDP growth. Portuguese output has now declined by more than 6.5% from its peak back in Q4 2007. As such, Portuguese GDP has been trimmed to levels last observed back at the beginning of the new millennium. The Q3 2012 GDP release thus concludes the second full year of consecutive negative quarterly growth rates. 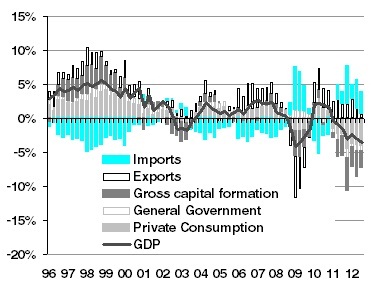 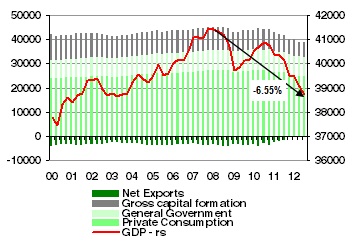 To state the obvious, the continued and ongoing fiscal consolidation measures have had the biggest negative impact on private consumption so far. Whilst clearly being the biggest drag on Portuguese growth for one year, it is also true that the biggest drop in private consumption was back in Q4 2011, when public sector salaries experienced a big cut. This shock is likely to have worked its way through the statistics by Q4 2012, and – while we expect private consumption to contribute negatively to overall growth again – there is reason to believe the worst is already behind us with respect to negative growth contributions from this particular GDP component.

What Does Not Work For Portugal at the End of 2012

While technical factors such as base effects may temporarily bring some support to private consumption and hence overall growth in Portugal, a decisive turnaround for the better critically relies on an improved labour market. For as long as wages in the services sector drop by more than 10% in just one year, and with unemployment still solidly on the rise – both among young people and overall – weak quarterly growth rates in private consumption are likely to be the norm for longer. 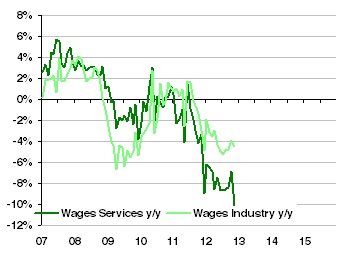 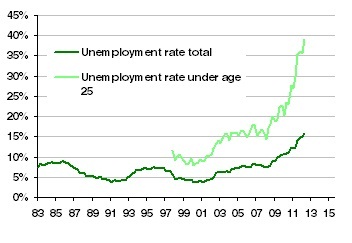 Although wages in industry are receding at an annual rate of -4%, this is no match for the decline in wages that the service sector is currently experiencing. Dropping by over 10% over the last year, this sub-index reflects the latest fiscal consolidation efforts by the Portuguese government. Having largely escaped a restructuring back in 2009, this is the sector that is in the eye of the near perfect Portuguese fiscal storm this time around. In comparison, the labour market situation in the industrial sector looks materially less stressed. While wages in the services sector are dropping at their quickest pace ever, the same does not hold true for wages in the industrial sector. The declines are still less pronounced than in 2009.

Keep in mind, too, that even after the latest adjustments, the services sector accounts for around 66% of those employed overall, with a large part of that 66% employed in the public sector – roughly 22%. This compares with a share of public sector workers of more than 30% back in 2008.

Jobs in Industry (Outside of Construction) and Agriculture Are Best Protected

As far as employment in the secondary sector is concerned, however, it is the construction sector that has had to bear the brunt of the decline in the industrial sector. Employment in other industrial sectors, though small to begin with, has remained broadly stable of late. The same holds true for agriculture, where the share of total people employed has been (moderately) on the rise since 2008.

The Challenges For the Service Sector Revisited

In line with the faltering wage statistics, the employment situation in industry has deteriorated with the overall market. Including the latest adjustments to the Portuguese labour market, overall employment has fallen well below the levels observed at the end of the 1990s. Even at current levels, however, there are no signs of an upturn in the Portuguese labour market for now. This in turn makes it difficult to look for a sustained turnaround in private consumption in 2013. The best realistic outcome for employment in Portugal would therefore be a stabilisation at lower levels. 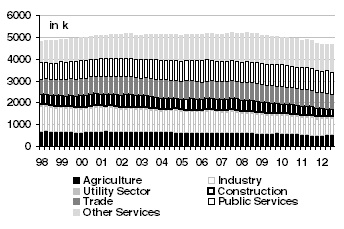 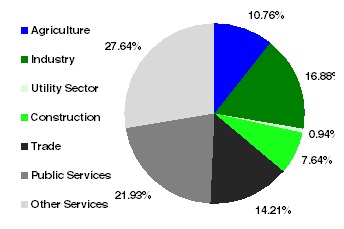 Despite the economic challenges, the Portuguese fiscal situation remains remarkably stable. This is above all due to the relentless efforts by the Portuguese government to comply with the roadmap for fiscal consolidation drafted by the Troika early on.

Portugal not only managed to print the smallest primary deficit in years – as of November 2012 – but a fiscal deficit target of 5% for the full year 2012 also remains within reach.

Keep in mind that the European Commission forecasts Portugal’s structural deficit to be just around 4% of GDP in 2012. This is solidly better than the 2003-07 average of 5.1%.

Chart 7: Overall Deficit as a Percentage of GDP 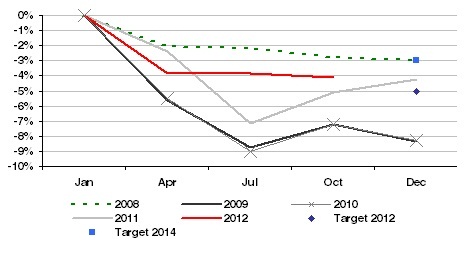 Given the soft Portuguese labour market discussed above, unemployment expenses are unsurprisingly up compared to previous years but they remain comparatively subdued in absolute terms. Compared to November 2011, the respective figure increased by roughly €500mn to nearly €2.5bn. While these expenses made up half of the primary deficit at the end of 2012, the amount looks small relative to overall government expenses of roughly €50bn per year. 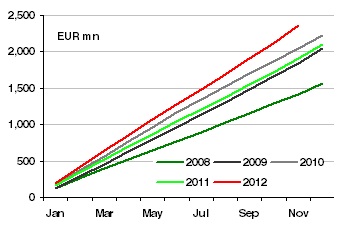 Although the Portuguese fiscal situation has come a long way – particularly in light of the growth challenges nationally and globally – further measures are needed to bring Portuguese debt dynamics under control for good. With the fiscal consolidation measures in the 2013 budget heavily tilted towards tax increases, and not least in light of the elevated number of public sector workers, any future consolidation efforts will likely have to target spending cuts in the public sector. 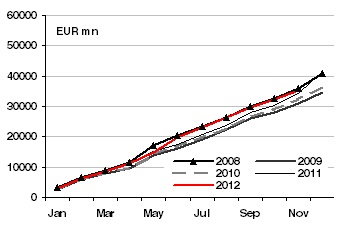 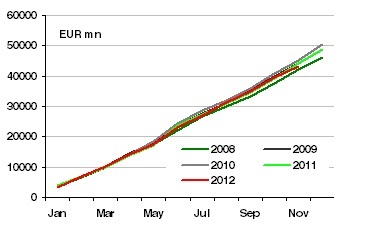 While the political debate has heated up on this issue of late, fiscal credibility remains absolutely key, and one of the main tasks for Portuguese politicians in 2013. Not least, such credibility is needed to support the second big challenge Portugal is facing in 2013: the return to the capital markets with a long-dated government bond sometime towards the end of Q3 2013.

So far, the decisive measures taken by the Portuguese government alongside the efforts by other European institutions, most notably the ECB, have been viewed favourably by financial markets, resulting in Portuguese government bond yields edging consistently lower. At a level of just above 6%, the yield for the 10-year bond has moved back down to levels last seen in 2011. 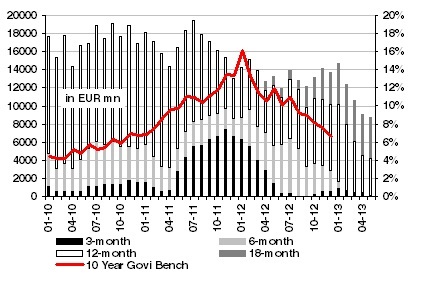 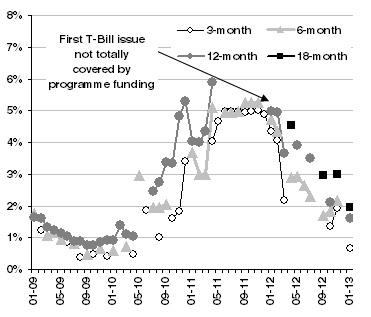 Encouraging Signs From the Markets

Importantly, the latest Portuguese bill auction on Wednesday can be viewed as an example of how much more confident investors have become vis-à-vis Portugal and its fiscal position. Not only has Portugal been able to issue bills with maturities well beyond the end of the Troika programme, but also – as of January 2013 – the overwhelming majority of outstanding bills has a maturity of 12 months or longer, too. This renewed confidence has in turn no doubt led to the falling yield levels. Lastly, it is the total issue of €2.5bn relative to a total funding need of €11.5bn (as communicated by the Portuguese funding agency IGCP) that seems to provide leeway on the way to the first public issue since the introduction of the Troika programme.

Return to Capital Markets As Overriding Target For 2013

While the challenges for the Portuguese economy and its government are many, positive news has clearly dominated the first few weeks of 2013. On the way to a successful reappearance on the capital markets later this year, however, it will be absolutely key that fiscal consolidation efforts remain credible. Market sentiment may have improved of late, and this does take some pressure off the decision-makers. But, to effectively manage financial markets and not to be managed by them, as was the case into the first half of 2011, continued progress along the path outlined by the Tr-oika appears absolutely imperative. While various international institutions can help (and already have helped) to alleviate the pain, it comes down to Portuguese policymakers to keep the restructuring going and fiscal consolidation on the straight and narrow.