The table below shows a sample of the data from our Eastern Europe survey on Sectoral Growth (in this case, from our July 2020 Eastern Europe Consensus Forecasts survey), with selected data for three countries: Poland, Romania and Turkey, together with textual analysis from the same publication. 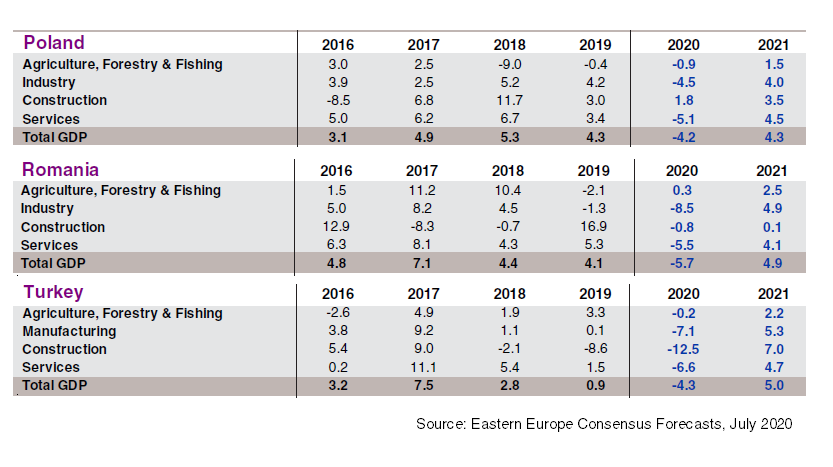 Government imposed lockdowns to contain the spread of the Covid-19 virus caused a near collapse in certain parts of the service sector. Construction, another key driver of GDP across Central and Eastern Europe but which had lost momentum even before the onset of the pandemic, suffered a similar shock. From a position of standstill, green shoots of recovery began to emerge in June, as factories and shops were allowed to reopen for business. Yet capacity is constrained by new operational guidelines and pickups in sentiment have differed across sectors and countries. Forecasts suggest that Poland and Slovakia may be better positioned to claw back output losses than Croatia and Turkey, which are less self sufficient and more reliant on tourism. The complex and fast-changing nature of the health crisis makes the trajectory of GDP hard to judge, however. Some concern also surrounds the way and speed at which the newly-agreed EU support funds will be distributed, which may affect the investment outlook.

A portion of text from Eastern Europe Consensus Forecasts, July 23, 2020.