Argentina’s current financial meltdown began after August 11, when incumbent president Mauricio Macri lost a primary election to his opponent Alberto Fernández. With a Peronist win in October’s presidential election now looking highly likely, the Argentine peso lost almost 20% of its value in one day as investors dumped the currency in droves. 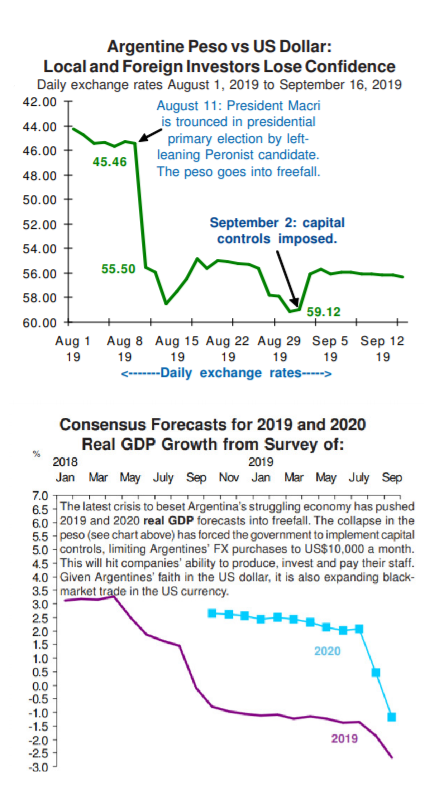 Argentines themselves have long preferred the stability of the US dollar to the highly volatile peso, compounding the loss of confidence in the currency. This lack of belief in the peso – and, in turn, the government – is a longtime problem underpinning the vast majority of Argentina’s financial crises. This, along with painful fiscal austerity (coupled with a lack of meaningful structural reforms) has left Argentina confronting problems similar to those it faced back in late-2001. The country suffered the world’s largest debt default then, and the risk of another massive default has now increased. The government has already announced its intent to “reprofile” US$101bn in dollar-denominated debt borrowed over the past few years, but this could put the IMF’s latest US$5.4bn tranche of emergency financing (due this month) in jeopardy. In order to stem the collapse in the peso and erosion in forex reserves, the government imposed capital controls on September 2, which helped to support the currency somewhat. Still, our panel’s outlook for both this year and next has worsened considerably amid the upheaval.