In addition to our regular monthly surveys of projections for over 90 currencies we occasionally undertake a special survey on seasonal currency patterns in Foreign Exchange Consensus Forecasts (in April) for the currencies listed below.

To download a sample issue of Foreign Exchange Consensus Forecasts please click on the button to below or continue reading to learn more about this special survey.

Like many other economic variables, exchange rates are sometimes thought to be subject to seasonal influences. These could arise from a number of sources, including dependence on industries which are subject to seasonal swings in demand or supply (tourism and agriculture, for example) and financial effects such as the repatriation of overseas earnings ahead of a financial year end. In order to identify such patterns (or not), we have adopted a relatively widely used statistical approach, known as X12 ARIMA (developed by the US Census Bureau), to analyse underlying trends. Examining end month data from January 2001 to December 2020, we calculated X12 ARIMA seasonal factors for 36 of the major currencies we cover (selected countries shown in the table below. These measure the average deviation of an exchange rate from its trend rate in each month over the past twenty years.

The table and text commentary below represent a small portion of this special survey taken from our April 2021 issue of Foreign Exchange Consensus Forecasts. 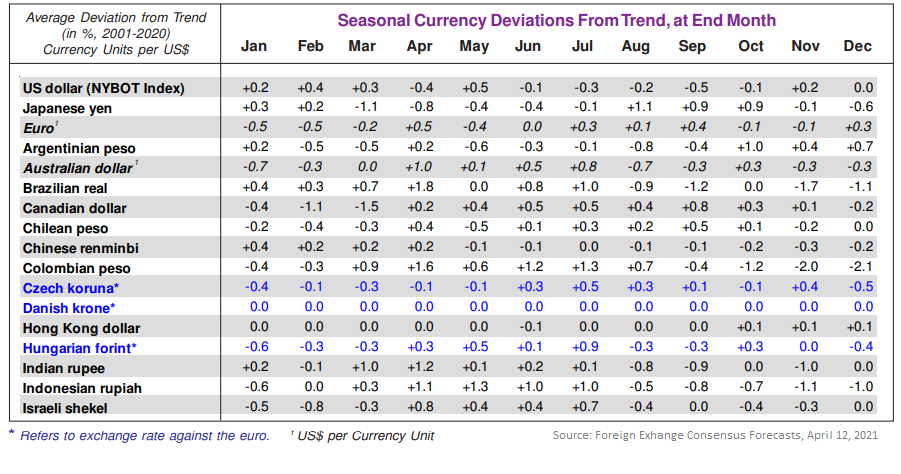 Our long-term historical analysis continues to suggest that seasonal influences on currencies are generally modest, particularly once adjustments are made to account for outlying observations. On average, of the 36 major currencies covered in the table below, almost all deviated from trend within a narrow range of plus or minus 1.0%. Estimates for the US dollar (based on NYBOT index weights, as explained on page 3) suggest that it has a slight tendency toward strength in the first half of the calendar year, except April, and weakness in July through October. In contrast, the euro (which has a significant weight in the NYBOT index) showed the opposite pattern over the same period.

A portion of text from Foreign Exchange Consensus Forecasts, April 12, 2021.