In addition to our regular monthly surveys of projections for over 90 currencies we also undertake a special survey of real interest rate trends in Foreign Exchange Consensus Forecasts (in May and November) for the countries listed below. We present consensus estimates of both short- and long-term interest rates.

To download a sample issue of Foreign Exchange Consensus Forecasts please click on the button below or continue reading to learn more about this special survey.

The table and text commentary below represent a small portion of this special survey taken from our November 2021 issue of Foreign Exchange Consensus Forecasts. 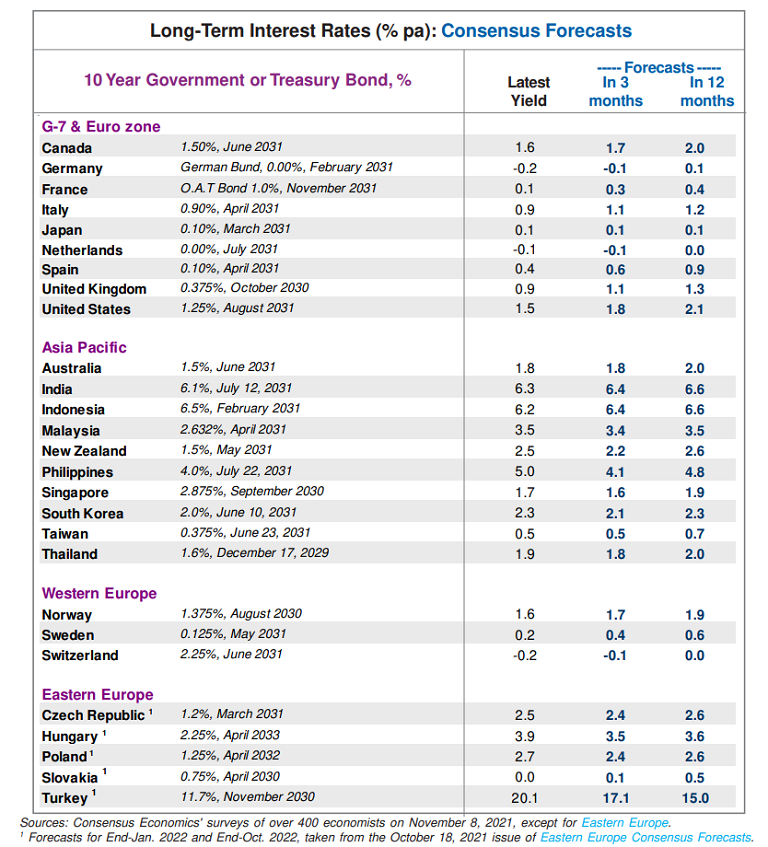 At the time of our previous analysis on interest rate trends six months ago, economists were preoccupied with two questions. The first was how quickly could economies recover after virus containment measures were relaxed. And the second related to how soon should policymakers begin to withdraw unprecedented levels of fiscal and monetary stimulus. While most countries saw large bumps to GDP data in Q2, the unevenness of the upturn suggests that policy normalisation will not be straightforward. Supply disruptions and product shortages have not only constrained expected rebounds in consumer spending and manufacturing, but also triggered a burst in price increases, as evidenced by a surge in the cost of natural gas. Inflation is certainly no longer seen as purely transitory, at least in the previous sense, and bond yields, which are inversely related to price, have been either near record lows or negative in real terms. With a few notable exceptions, both short-term and long-term rates are set to begin a process of adjustment to inflation risks and as central banks begin to wind down their bond buying programmes. The US Fed confirmed last week the start of the taper process, which should see it come to an end by mid-2022. In addition, speculation about the timing and duration of subsequent rate hikes may cause some instability unless properly communicated. Indeed, the UK pound suffered a mini-slump last week after the Bank of England decided against a rate hike, which wrong-footed investors. Equivalent rates in the euro zone and Japan, remain anchored at low levels, by contrast, as policymakers have doubled down on the need to protect fragile recoveries. Short rates for Brazil, Russia, and Turkey, on the other hand, have risen quickly, due to high inflation vulnerability to capital flight.

A portion of the analysis from Foreign Exchange Consensus Forecasts, November 8, 2021.