In addition to our regular monthly surveys for our panellists central projections for over 90 currencies we also ask our panellists for their estimates of the likelihood of alternative, perhaps less likely, outcomes in certain major currencies over the next twelve months in Foreign Exchange Consensus Forecasts (in December) for the currencies listed below.

To download a sample issue of Foreign Exchange Consensus Forecasts please click on the button below or continue reading to learn more about this special survey.

The chart and text commentary below represent a portion of this special survey taken from our December 2021 issue of Foreign Exchange Consensus Forecasts. 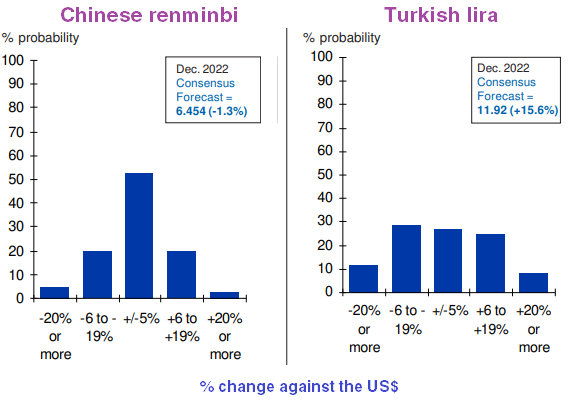 Consensus forecasts are averages of individual panellists’ predictions of how a currency is most likely to move over a given time horizon, but many forecasters also attach some probability to various alternative outcomes or scenarios. This special survey of Currency Risk Probability Assessments attempts to quantify these uncertainties, using our panellists’ estimates to produce a number of consensus probability or risk distributions. This approach is not only useful in the case of pegged or managed currencies, but also for those wherein confidence in the central scenario is relatively low and the odds associated with surprises are high.

Compared to the last time we undertook this survey in December 2020, it is striking how much less confidence there is in central scenarios of currencies remaining within a +/-5% range of their current levels. Few are assigned more than a 50% chance of this occurring, implying that volatility is likely to remain a facet of FX markets in 2022. This is perhaps down to the experiences of the last year, where even vaccines did not fully prevent returns of restrictions to contain virus spread and contributed to large currency corrections. The emergence of the more transmissive ‘Omicron’ variant underlines how quickly sentiment can swing. One major currency that has a higher likelihood of staying in a narrow range is the Chinese renminbi (chart above), as it remains heavily managed, and Beijing will probably not tolerate excess volatility ahead of the 20th National Congress later in 2022. It is also less likely to accept a large strengthening of the currency, as this would jeopardise its export competitiveness. At the other end of the scale, the Turkish Lira (chart above) appears to have a highly uncertain future ahead of it, as the President and the Central Bank are rallying against economic orthodoxy and slashing rates even as monthly inflation exceeds 20% (y-o-y), confounding markets.