In addition to their regular forecasts for the major economic variables, twice a year (in February and August) we survey our Asia Pacific Consensus Forecasts panellists for their projections for exports, imports and current account balances for the next 4 years. Our panellists are also asked for their predictions for growth in the volume of goods and service exports and imports over the same period.

Our survey for Trade and Current Account Balances covers each of the countries listed below. For illustrative purposes we have included forecast tables for four countries along with a portion of the text commentary taken from our February 2019 survey below. To view a full sample issue of Asia Pacific Consensus Forecasts please click the “Download Sample Issues” button below. 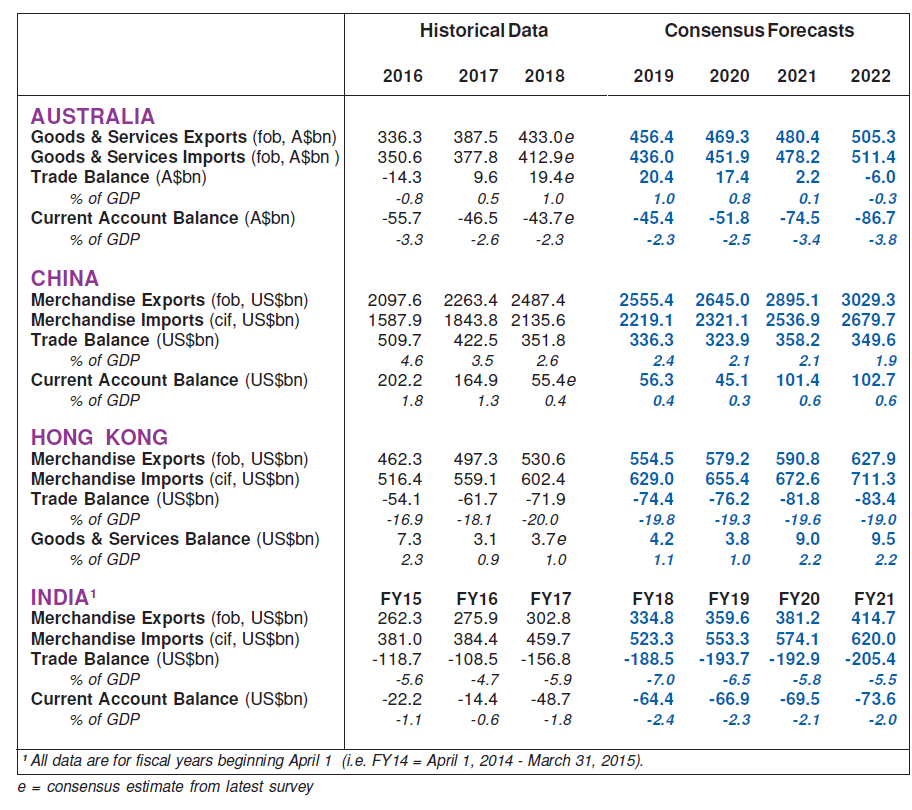 The unresolved trade conflict between China and the US, which has so far seen America slap tariffs on around US$250bn worth of Chinese goods and China responding with equally stiff measures, continues to cast a pall over the global trade outlook. Prolonged trade tensions between the world’s two largest economies have seen export orders contract in many Asian countries, along with a downturn in December manufacturing data across the region. Moreover, a contraction in South Korean exports for a second month in January – widely considered to be a barometer for regional trade – bodes ill for trade activity this year. East Asia’s supply chains, particularly those with substantial trade ties to both nations, would be hard hit by a US-China trade war. A deal needs to be reached by the March 1 deadline to avoid a further escalation in the trade dispute. Alongside heightened trade tensions, a softening of the global electronics cycle suggests that exports will play a lesser role in supporting global growth this year. Trade and current account forecasts have consequently been scaled back this year for several Asian countries. On top of increased trade protectionism, weaker Eurozone growth, a slowdown in China and uncertainty over Brexit are contributing to dimmer world activity this year. 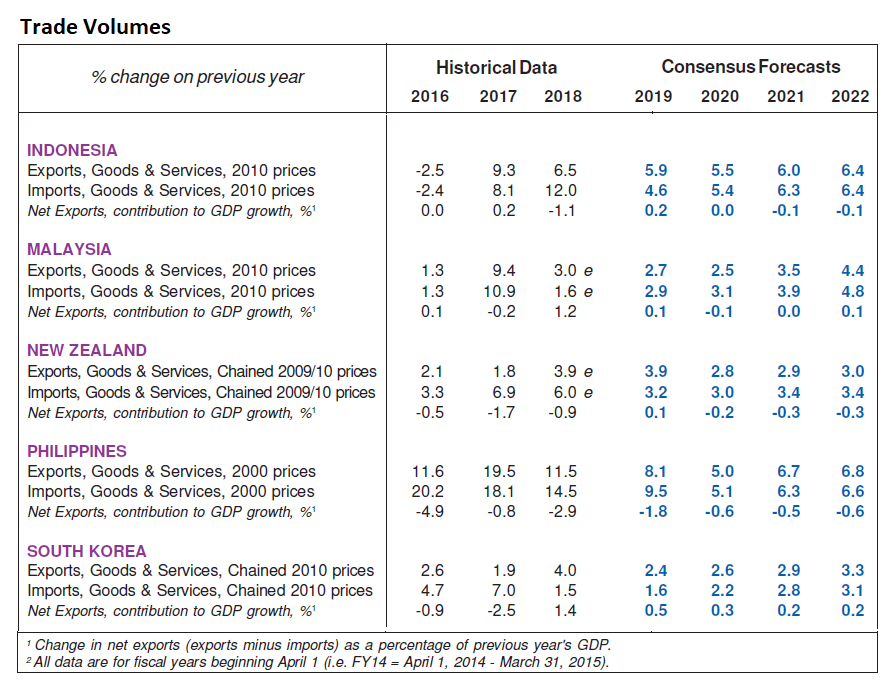 The table above shows our panellists’ projections for growth in goods and services exports and imports, measured in real terms (i.e. excluding the effects of changes in trade prices). In each case, we have also calculated estimates of the contribution to growth implied by our panels’ forecasts for changes in export and import volumes, measured as the change in net exports (goods and services exports minus goods and services imports) as a percentage of GDP in the previous year. This indicates whether the external sector is adding to or subtracting from overall GDP growth.

A portion of text from Asia Pacific Consensus Forecasts, February 11, 2019.