Our surveys ask respondents for their quarter-by-quarter forecasts as a percentage change over the same quarter of the previous year (often referred to as year-on-year). Below is a list of 50+ countries for which we collect quarterly forecasts. Please note that for the US economy, quarterly forecasts are updated monthly in our publication Consensus Forecasts – USA, and the forecasts shown on a year-on-year and quarter-on-quarter annualized basis. 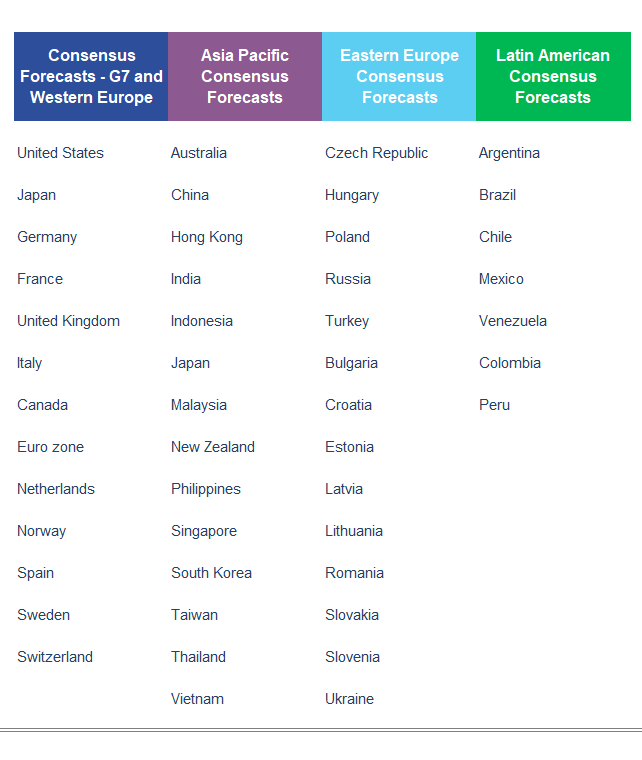 The table below shows a sample of the data from one of our surveys for Quarter-by-Quarter forecasts in France.

Many Western European economies regained momentum over the summer months, buoyed by a lifting of most social restrictions and higher mobility. A cautious rebound in overseas travel also helped to revive spending and job opportunities, enabling governments to pare back most emergency support measures implemented near the start of the pandemic to avert what may have otherwise been a catastrophic collapse in business activity and jobs. Increasingly, attention has shifted towards inflation and its erosion of household (and company) earnings, fuelled by hefty jumps in energy bills and food prices. For most economies, including the US, quarterly inflation is tipped to peak in Q4 2021 and Q1 2022 before moderating thereafter as the weak base of comparison fades away. The European inflation surge is expected to dissipate even more rapidly – perhaps because of greater underlying disinflationary pressures in some of their countries. Uncertainty has risen, though, as the emergence of the Omicron variant and fresh Covid-based curfews risk extending supply bottlenecks which have contributed to sky-high raw materials costs and curbed companies’ operating capacity. They have also complicated the policy plans of central banks whose job to preserve price stability is balanced by economic and employment considerations, especially following last year’s collapse in GDP levels. The risk that premature tightening to tackle above-target inflation could unintentionally harm fledgling and uneven recoveries across the G7 & Western Europe remains delicately poised. The UK economy’s improvement this year has been well supported by the vaccination programme, but concerns amid ongoing tensions with Brussels, alongside newly-announced restrictions prompted by Omicron cases, could shake the next few quarters. Italy’s growth upturn has strengthened on accelerating investment linked in part to its access to EU recovery funds, of which it is the biggest beneficiary in the Euro zone. Spain, meanwhile, has seen its GDP forecasts slashed in recent months, attributed to weak spending and slow uptake of EU-funded investment. The minority government has pushed through its 2022 budget plan, however, which could support activity.