In addition to their regular forecasts for the major economic variables, twice a year (in February and August) we ask our Consensus Forecasts panellists’ for their projections for total employment growth and wage or employment costs for the next twelve years, along with forecasts for real and nominal GDP growth over the same period. Using indices derived from these projections, we have calculated forecasts for changes to broad measures of productivity growth (real and nominal GDP per employee) and an indicator of unit wage costs (calculated by dividing the employment cost indices by the indices of real GDP per employee). Although some of the wage definitions used are imperfect measures for total compensation per employee, our calculated indices do provide an indication of future trends in unit wage costs.

Our surveys for Trends in Productivity and Wages cover each of the countries listed below. For illustrative purposes we have included forecast tables for the United States and Japan, along with a text commentary taken from our August 2021 survey below. To view a sample issue of Consensus Forecasts please click the “Download Sample Issues” button below. 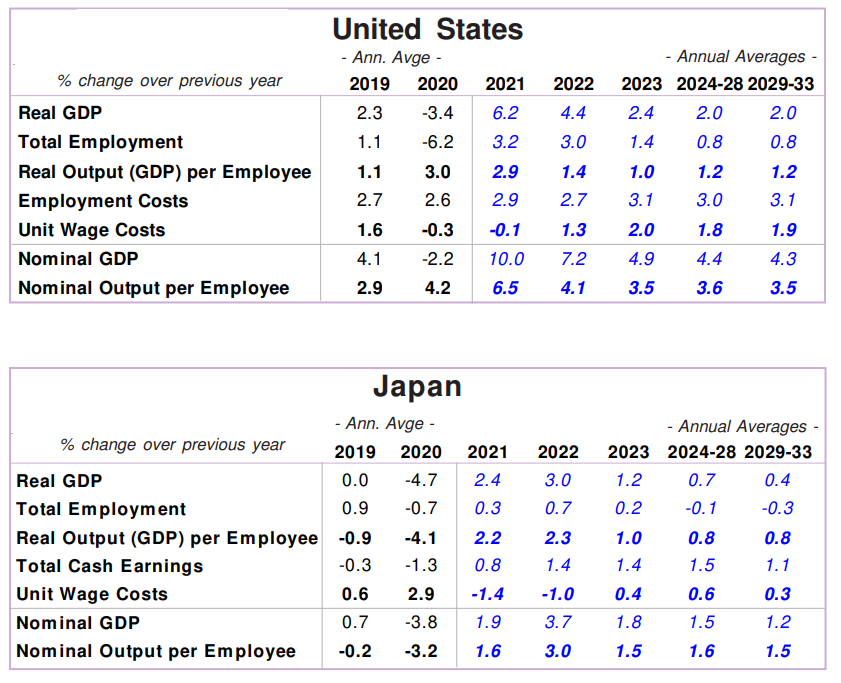 Our Trends in Productivity & Wages survey (measured as Real Output per Employee) comes with a disclaimer: our productivity estimates are not broadly comparable across countries in the current environment, because governments took different approaches to mitigating the economic shock of the pandemic. In the United States, the first lockdown came with major job cuts, illustrating the US‘s flexible labour market. By contrast, Western European economies used their major stimulus packages to subsidise workers’ wages and jobs via paid furlough schemes. This reduced unemployment and, in turn, major redundancy and welfare pay-outs. Consequently, the drop in Total Employment in European economies last year (-0.8% in Germany and -0.5% in France) was significantly smaller than in the US (-6.2%) and Canada (-5.2%). This left US productivity in positive territory at +3.0% in 2020, in contrast with sizeable declines in productivity for Japan, Germany, France, UK and Italy. This year, US productivity is expected to stay broadly strong, at 2.9%, because GDP growth is booming on the back of sizeable fiscal stimulus. So, too, is the US job market, though not as much as growth – employment is expected to jump by 3.2%. Indeed, firms are attempting to beef up their job offers amid labour shortages. This is expected to weigh on unit wage costs. Productivity gains in Japan, Germany and elsewhere in 2021 and 2022 will be noticeably sizeable but should normalise in 2023. Nevertheless, the pandemic has highlighted potential productivity improvements, like remote-working and automation, which could spur investment/R&D and enable firms to boost operational efficiency (while also potentially disrupting traditional jobs, especially in people-facing services).

A portion of text from Consensus Forecasts – G7 and Western Europe, August 9, 2021.