More recently, we have broadened our coverage of Long-Term Consensus Forecasts by making them available in Excel format. The files contain historical survey data going back to 1989 for some countries, and include forecasts on GDP growth, Consumption, Investment, Consumer Prices and Interest Rates, among others. These databases are split into four regional modules (see table below), covering a total of 87 countries (29 new countries were added in April 2019 – full list of these new additions under the table below).

These files are updated with surveyed data four times a year (in January, April, July and October). For more information on our Long-Term forecasts databases in Excel, please contact us at Consensus Economics.

A recent study conducted by M. Kose, F. Ohnsorge and N. Sugawara (2019) titled “The Growth Forecast Puzzle” investigates the increasing pessimism over forecasts for the long-term economic outlook. The authors examine the historic trends in Long-Term Consensus GDP Growth Forecasts and how they may offer insight into the current state of the global economy.

The chart below shows trends in Long-Term GDP Growth and Inflation Forecast data for Russia taken from our Eastern Europe Consensus Forecasts publication. 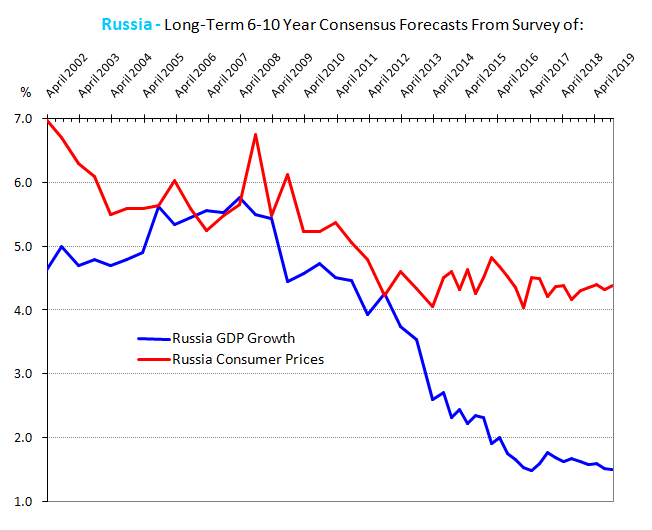 For most countries in Central and Eastern Europe (CEE), real GDP forecasts for the 6-10 year horizon have remained rather depressed (See Russia, chart above). Hungary and Poland have been among those that have experienced gains in domestic demand as a share of total output. However, this has also been accompanied by an increase in wages, which could impact productivity. Panellists also retain a cautious view regarding potential, due to a notable slowdown in structural reforms, a build up of debt and the influence of global eco-political instability. Disputes and concerns about future EU enlargement among existing member governments have also cast doubt over future integration, labour participation and capital investment developments. Unwanted trade disruptions and increased bureaucracy caused by the planned UK-EU divorce have also reduced optimism about the long-term outlook.

A portion of text from Eastern Europe Consensus Forecasts, October 21, 2019.