In addition to their regular forecasts for the major economic indicators (in February for Latin American Consensus Forecasts and in July for the Consensus Forecasts – G7 and Western Europe and Asia Pacific Consensus Forecasts countries), we survey our panelists for their qualitative evaluations of economic policy. The balance between current monetary and fiscal policy is assessed, as are panellists’ views regarding the likely and recommended direction of policy over the next twelve months.

Our survey for Economic Policy Evaluation covers each of the countries listed above. The data below sets out the consensus responses for two of the Latin American economies, Mexico and Colombia, along with text commentary taken from our February 2021 survey below. To view a sample issue of Latin American Consensus Forecasts please click below. 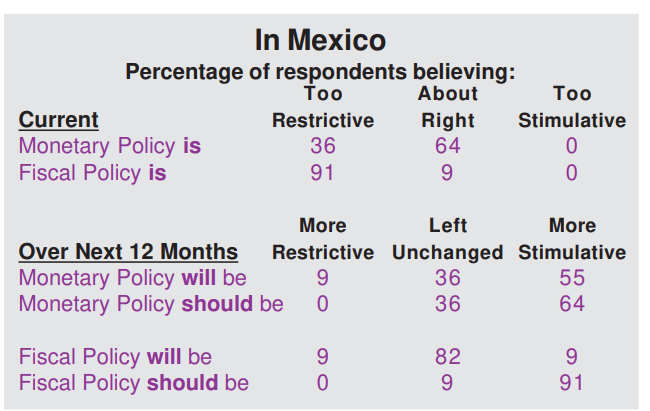 In Mexico, our respondents are largely supportive of current central bank policy. Indeed, one of the positive factors affecting the consensus forecasts for 2021  is Banxico’s independence with regards to crafting and executing monetary policy. During this pandemic, which caused GDP to decline by -8.3% last year, Banxico cut its policy rate in order to stimulate lending. This was especially notable because on the fiscal side, President López Obrador has refrained from offering significant fiscal support to public bureaucracy and private business (both of which he mistrusts). State energy entities have received targeted fiscal support, while cash handouts to some households were meant to tide over those hardest-hit during the crisis, but on the whole, the fiscal deficit remained around -3% of GDP last year. And so while 64% of respondents believe that current monetary policy is about right, only 9% believe the same for fiscal policy. In fact, 91% would like to see the fiscal brakes loosened significantly. 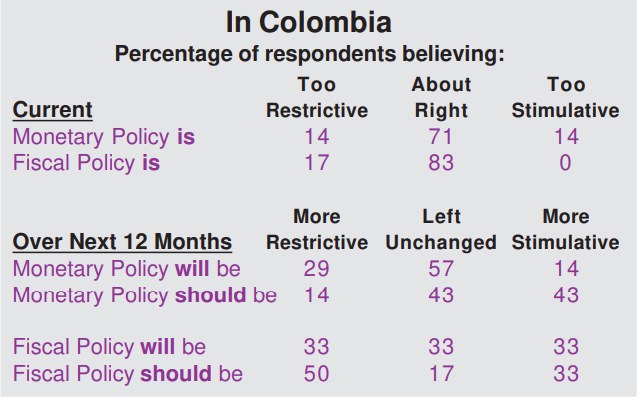 The pandemic has encouraged the authorities in Colombia to pursue accommodative monetary policy and ramp up spending. Despite this, GDP still contracted by a record -6.8% last year. And with inflation having slowed substantially since mid-2020, 43% of respondents think that monetary policy should be looser. On the other hand, 50% believe that fiscal policy should be tightened. Higher government spending, alongside soft oil prices and weak tax receipts have inflated the budget deficit, which many view needs to be reined in.

A portion of text from Latin American Consensus Forecasts, February 15, 2021.