This special survey aims to assess the risk of these other ‘non-consensus’ outcomes, which range wider than a simple examination of the highest and lowest central forecasts would suggest. In order to do this we asked our panellists to assess the probability that the variables covered would fall within the ranges displayed in the partial sample tables below, which allowed us to compile some rough probability distributions to identify those areas of greatest uncertainty in the economic outlook. The ranges themselves differ from country to country and from variable to variable, but were set so that the central range (the middle column in the tables and charts) encompassed the consensus forecast from last month’s survey. The width of all of the ranges was chosen to reflect the standard deviation of central forecasts for each variable. The ranges are wider for those variables for which the economic outlook is most uncertain.

In our January 2022 special survey of forecast probabilities, in addition to their central (most likely) forecasts in the consensus economic survey, we asked our panellists to assess the probabilities of a range of alternative outcomes for each of the listed variables, i.e. GDP forecasts and consumer price inflation in 2022, as well as for exchange rate forecasts (for the euro, the Japanese yen, the UK pound and the Canadian dollar) against the US dollar by the end of January 2023. This analysis is an attempt to quantify the risk that these economic indicators might turn out to be significantly higher or lower than individual forecasts currently suggest, and allows us to compile consensus probability distributions to identify those areas of greatest uncertainty in the economic outlook for the G-7 industrialized countries. 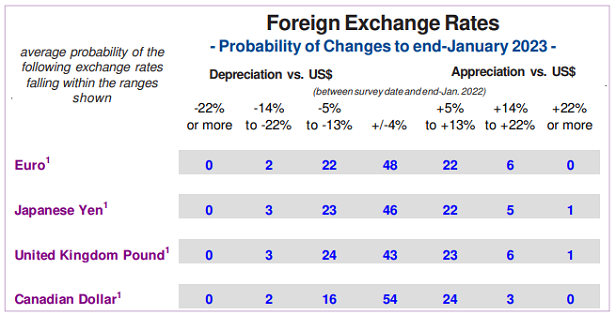 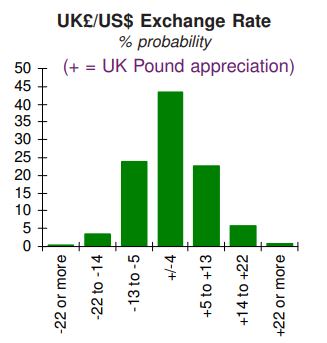 Consensus forecasts are mean averages of individual panellists’ predictions of the performance of various indicators over a given time. However, most forecasters would also attach some probability to various – perhaps radically different – outcomes or scenarios. These probabilities provide a wider assessment of the risk attached to the consensus and are based on estimates of unexpected or extreme movements in key variables, such as exchange rates or commodity prices. These and other factors could alter a central forecast. Every year in January, we ask our panellists to supplement their central forecasts for GDP growth and inflation for the year ahead with a set of probabilities of the outcomes falling within specified ranges shown in the tables. The ranges differ from country to country and from variable to variable, but were chosen so that the central range (the middle column in the tables and charts) generally encompassed the consensus forecast from last month’s survey.

We also show the probability distributions for oil prices and the forex cross rates for the G-7 currencies which are pretty evenly distributed in inverted-V shape. Stock markets have boomed on the back of the major liquidity push from the US Federal Reserve, European Central Bank and others. However, with inflation accelerating across the G7 (on the back of energy prices), central banks are looking to unwind quantitative easing and return to interest rate hikes this year. This could take the froth off of currencies and stock assets. Oil prices, though, have jumped. GDP and CPI probability distributions for many G-7 and Western European economies (see pages 28-30) have been affected by Omicron pushing up infections to record highs and inflationary pressures impinging on activity. Respondents for Germany, the UK, Canada, Euro zone, the Netherlands and Norway have assigned a noticeable probability to GDP skewing lower than their central forecast for 2022. CPI probabilities for many are skewing on the upside. 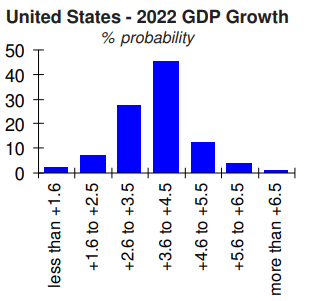 With the Omicron variant causing further Covid disruption across the G7 & Western Europe, forecasts for 2022 real GDP growth have taken a hit this month. The GDP consensus for the US, Japan, Germany and the Euro zone started trending noticeably downward in October, when concerns over surging natural gas prices upended initial expectations. All countries featured except Japan are now seeing 2022 CPI projections of above 3% – and close to 5% for the US and UK. Price pressures crept up for much of 2021 on the back of Covid resurgences and ongoing supply-chain bottlenecks. However, the October jump in energy costs exacerbated concerns that inflation was becoming less transitory (and more entrenched) than policymakers had hoped. Many central banks are now aiming to wind down QE and return to interest rate normalization: the Bank of England at its December MPC meeting raised the Base Rate to 0.25%. Given the deep economic recessions of 2020, activity ever since has been buffeted by stop-start Covid restrictions. Since late-November 2021, the emergence of a more contagious variant, Omicron, has provoked breakthrough infections in the vaccinated as well as the unvaccinated. Soaring case numbers have put renewed pressure on heathcare systems and resulted in further restrictions. Our panel’s investment forecasts have dropped noticeably in recent months, with Germany particularly affected by global supply-chain difficulties hitting its exporting industries. UK investment has also been curtailed by added Brexit strains.

For further information, including economic data on other countries, see the complete study in Consensus Forecasts – G7 and Western Europe, January 2022.