In addition to their regular forecasts, country panellists were asked to provide estimates of the growth of corporate profits in their respective economies between now and 2026. As is our usual practice, the data is measured as the average percentage change over the previous calendar year. Not surprisingly, the individual profits definitions differ according to local custom and data availability. However, following discussions with forecasters from our country panels, the definitions outlined below were considered as the most widely accepted economic measures of corporate profitability. The resulting consensus forecasts represent mean averages of the panellists’ forecasts. Readers should note that the groups of survey respondents may be smaller than those listed on our main country forecast tables.

Our surveys for Corporate Profits cover each of the countries listed below, and are conducted twice a year in May and November. The table and text commentary below represents a portion only of this special survey taken from our May 2021 issue of Consensus Forecasts – G7 and Western Europe.

Corporate Profits from the May 2021 Survey 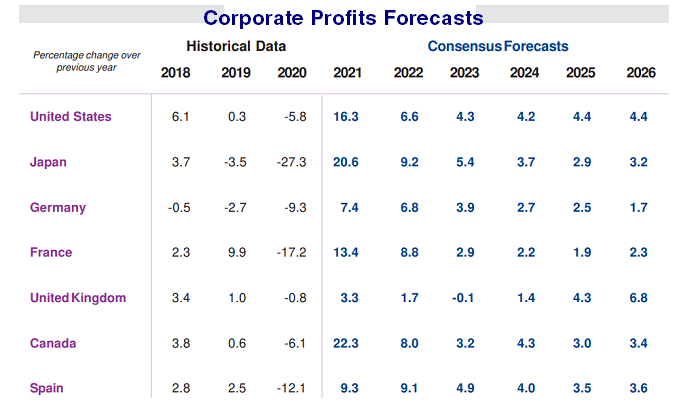 United States:- Pre-tax Corporate Profits with capital consumption and inventory valuation adjustment, i.e. after allowance for depreciation and for the impact of inflation on inventories.

Germany:- Gross Entrepreneurial and Property Income, excludes all wage and salary income but includes that from interest and dividends.

Canada:- Pre-tax Corporate Profits, excluding interest and investment income and before allowance for either the impact of inflation on inventories or capital depreciation.

Corporate Profits – Hammered by the Pandemic

Peaks and troughs in corporate profitability tend to precede those of the business cycle, with profit growth rates often peaking early in an economic expansion and then easing again before the downswing is fully underway. This leading cyclical pattern is represented in the chart (below) which shows recent corporate profits growth and forecasts for the United States, the United Kingdom (excluding North Sea oil and gas revenues) and Canada.  The US, German, French, UK, Canadian and Spanish series, as measured by the national accounts, are each based on a large sample of firms and are broadly comparable. 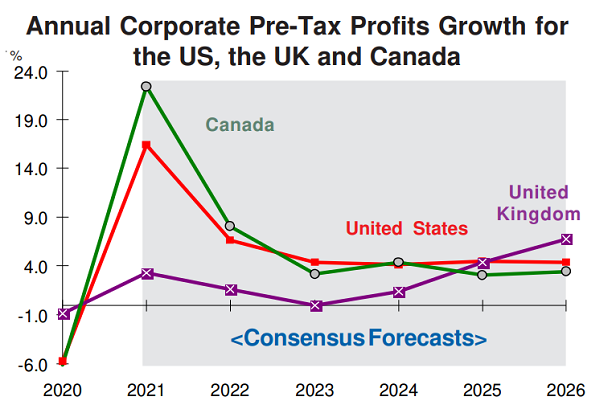 Profits were hammered in 2020 due to the global health emergency which paused everyday life as draconian lockdown rules restricted social contact and imposed shutdowns of entire industries. Of course, impacts across the business spectrum have been uneven, with those in hospitality and retail suffering the deepest holes in revenue. Some were given lifelines by government stimulus (including tax relief, grants and loans) to ward off insolvency and jobs market catastrophe. Increasingly, economies have experienced a divergence between services and manufacturing sectors, the latter able to continue operations (to some extent at least) amid automation and a resurgence in export demand from Asian markets. Digitalisation has made remote working more broadly accessible during the pandemic, and there remains uncertainty over the possible implications on future urban planning and investment, especially as companies spot opportunities to slash overhead costs and restore profit margins. This extends to other consumer habits too, such as the boom in online shopping, which could become a permanent shift even if a return to pre-crisis norms edges closer. The vaccine rollout has been particularly rapid in the US and UK, and could be crucial for beleaguered airlines and tourist-reliant destinations ahead of the holiday season. France and Spain are preparing to welcome foreign visitors with appropriate Covid-19 certificates. Should the worst of the virus have passed, a far more positive outlook for profits could await in the next few years. Yet, as activity more broadly restarts and pent-up demand accelerates, firms face near-term battles against rising input costs driven by competition for resources as well as supply chain disruptions which have sent commodity prices sky-rocketing and lumber to record highs