For users of forecast information in company planning, the challenging investment climate has made it even more important to obtain accurate and timely estimates of sentiment and to monitor changes regularly. Ocean shipping – dry bulk, tanker and general cargo – is sensitive to the business cycle due to the cost of infrastructure expansion and the uncertainty in the freight environment. Based on forecasts of short and long-term growth, studies of feasibility are needed for new projects as managers form views about expected demand and supply of materials from one port to another.

The cost of freight, which differs greatly across routes and is subject to directional imbalance, is important. Mineral resources tend to be geographically distant from where they are processed, and carriers often return empty to original ports of shipment after their cargo is discharged at destination. Iron ore, for example, is transported in large, specialised ships mainly from Brazil to Europe, China and Japan, and from Australia to China and Japan.

A major problem that ship owners face is the long lag time between signing a new building contract and the actual delivery of the vessel, given the opportunity costs and risks tied to the initial investment. Some shipping companies have been forced to cancel orders for new vessels due to an increase in maritime transport capacity in the industry following the global economic slowdown. Needless to say, the ability to spot a prospective downturn and subsequent upswing relatively early in a business cycle could mean the difference between project success and failure.

Forecasting is an inexact science. In addition, the competitive nature of macroeconomic forecast business has created an overwhelming problem of selection because forecast users are required to differentiate good estimates from the bad. Conflicting predictions by individual forecasters partly reflect the underlying assumptions, methodologies and theories, particularly during times of heightened global uncertainty. These ideas are complicated and largely immaterial to a non-specialist. An alternative to accepting an individual forecasters’ prediction is to use a consensus forecast by a group of independent forecasters. 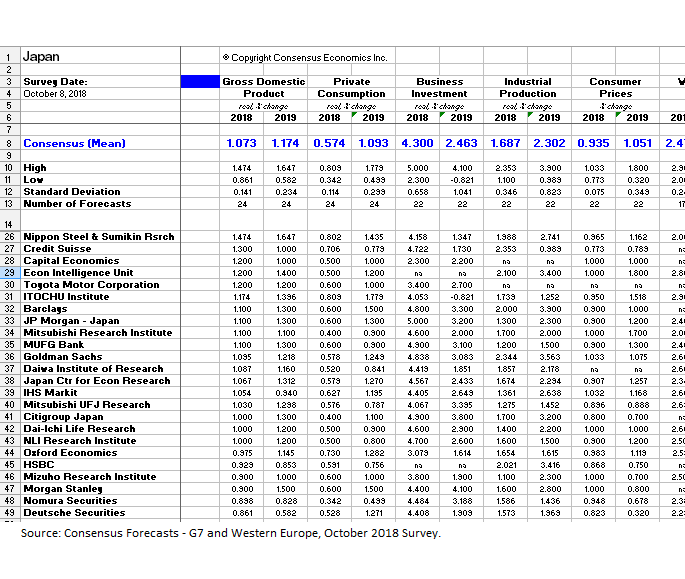 Aside from reducing the problem of choice, the consensus approach is appealing because it does not rest on a single view of the economy. In addition, it attempts to limit forecast risk and capture the information implicit in a range of forecasts. The following points are some of the intuitive advantages that consensus forecasts provide:

The results of consensus forecasts have attracted a good deal of interest in recent decades, especially as academics have published numerous papers on forecast accuracy. Victor Zarnowitz, a leading scholar of business cycles, and Steven McNees of the Federal Reserve Bank of Boston, found separately that the consensus measure was generally more accurate than individual forecasts for a range of variables. Roy Batchelor of the Cass Business School concluded that consensus forecasts outperformed those of the IMF and OECD in the 1990s, while more recent studies by the Swedish and Czech National Banks have been similarly complimentary to the consensus approach. Clearly, though, there are drawbacks with any forecast product and it would be a mistake to believe that the consensus (or any other forecast) offers the only solution to the problems facing planning managers. All forecast data should be used with caution. Quite often a look at the reasons behind the forecast estimates will lead to better judgements about the economic outlook.

In addition to consensus forecasts for the principal macroeconomic indicators – including GDP growth, industrial production and inflation – for G-7 and Western European countries, Asia Pacific, Eastern Europe and Latin America (covering more the 80 countries), Consensus Economics conducts regular surveys on foreign exchange rates and commodity prices. For energy and metals, nominal price forecasts are regularly collected for the next 8 quarters and annual estimates for the following ten years (2012 to 2022 in the December 2012 poll). A 5-10 year price estimate in real (inflation-adjusted) terms is also included, as it is useful in the analysis of project feasibility and other long-term investment decisions.

Planning managers require an appropriate, reliable view of the world economic outlook in order to reduce the risks involved in assessing investment opportunities. Can the US economy successfully address its fiscal crisis and avert a recession in 2013? What is the GDP outlook for the Chinese economy under its new leaders? How will a deep recession in the periphery affect growth in euro zone core? While consensus forecasts might not offer the best estimate at any given moment in time to help provide answers to these questions, many academic studies have demonstrated that they are difficult to improve upon over an extended period.